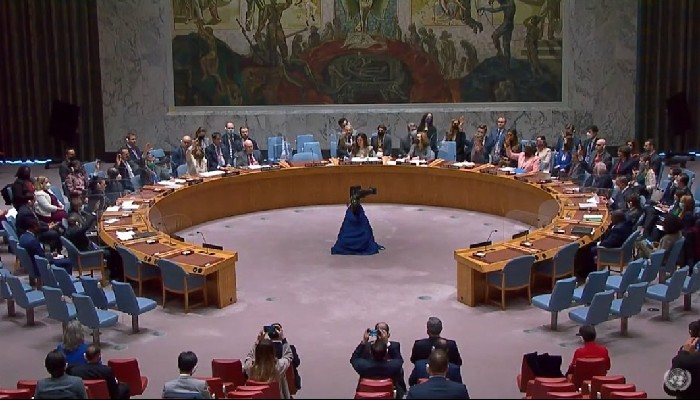 It was the UN Security Council’s third vote since February 24.

The draft resolution was defeated by a vote of 2 in favour to none against, with 13 abstentions

India on Wednesday abstained at a UN Security Council (UNSC) vote on a draft resolution moved by the Russian Federation demanding civilian protection and unhindered humanitarian access in Ukraine.

A statement by the UNSC said that the council failed to adopt the draft resolution as several delegates rejected the text as an attempt by the Russian Federation to justify its aggression against its neighbour.

According to the UNSC statement, it was the Council’s third vote since February 24 and would have needed nine votes in favour with no veto to pass.

Belarus, Democratic People’s Republic of Korea and Syria joined the Russian Federation in submitting the text, it noted.

By its terms, the Council would have demanded that civilians are fully protected, that all parties ensure respect for and protection of all medical and humanitarian personnel exclusively engaged in their medical duties; that they respect international law in connection with objects indispensable to the survival of the civilian population; and allow safe and unhindered passage to destinations outside Ukraine, including for foreign nationals, without discrimination, the statement said.

It may be recalled that India had previously abstained on two occasions in the UN Security Council and once in the UN General Assembly on resolutions on Russia's invasion of Ukraine.

Ahead of the UNSC vote on Wednesday, Foreign Secretary Harsh Vardhan Shringla arrived at the United Nations headquarters in New York and also addressed a Security Council briefing on Cooperation between the UN and the League of Arab States chaired by Council President UAE.