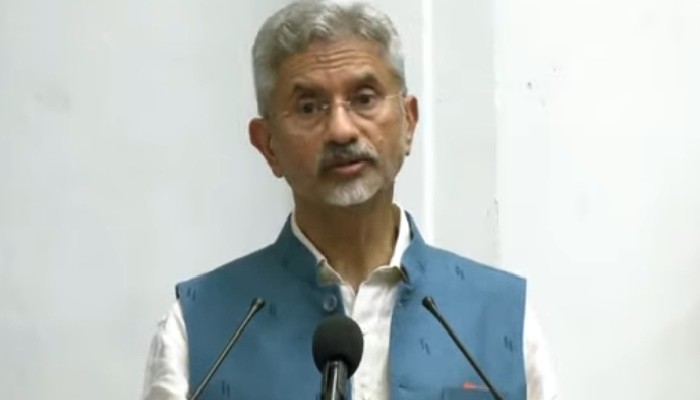 India’s foreign policy also helped during the evacuation exercise from Afghanistan and in the repatriation of Indians from across the world after Covid-19 travel restrictions, Jaishankar said.

Addressing the students, EAM Jaishankar said a good foreign policy must work for you all; and I include that right here listening to me.

“Now think for a moment as an Indian student who happened to still be in Ukraine on the 24th of February this year,” Jaishankar noted.

“Concerned about your educational prospects, you have now found yourself in the middle of a serious conflict. And it is not just you, it’s 20,000 more of your fellow nationals and there are at the same time millions of Ukranians who are trying to get out of the country,” he argued.

“Internal travel is itself dangerous and complicated. The borders are even more so due to over-crowding and congestion. And in the highly impacted cities, there is even the physical danger of just stepping out in the open due to shelling and air strikes,” the Minister stated.

“Now this is when you really look to your Government for support and for extrication. And indeed, this is when the entire foreign policy apparatus swings into action as it did through Operation Ganga,” he added.

“It does so by facilitating transport, and this includes trains and buses. It intervenes at the highest levels in Russia and Ukraine to ensure the ceasing of fire for safe passage,” Jaishankar said.

“It engages the border authorities to ensure border crossing. And in extreme cases, such as, there is a particular town called Sumy, it even traverses conflict zones to assure you of the necessary logistics for your safety,” he informed.

“And once you are out of Ukraine, it works with neighbouring Governments in Romania, Hungary, Slovakia, Poland and Moldova to establish transit camps, to utilize their air fields and to organize the flights which are required for your safe return home,” the EAM said.

“Now reflect for a moment on these efforts, the interventions, the relationships at various levels that have gone into this – starting from the very top and think of what it needed to make all of this happen,” he suggested.

Pointing out at another example Jaishankar said, “I go to Kabul on the 15th of August 2021- last year. Now for whatever reason, imagine that you found yourself stranded in the middle of the city when the Taliban took over.”

“A huge effort was made by the Indian Government to bring exactly such people home. Quite apart from navigating a city now controlled by Taliban check points, you could well ask how difficult could this be,” he asked.

“Well, let me tell you how difficult it was. It was as challenging as combining access to a secured American base that was on edge, surrounded by desperate Afghans and suspicious Taliban; of using Tajik rear support for very rapid responses, of accessing Iranian airspace at short notice and of quietly utilizing Qatari facilitation,” the Minister stated.

“Now there were some of our nationals who were beneficiaries of seats in flights run by the US, France, UK or the Emirates and all these were very delicately negotiated. Now this might seem, even from my account, as exceptionally complicated logistics,” he argued.

“But it was really more than that; behind it were years of relationships that really delivered at a time of need. Equally important, this represented the efficacy of a flexible and pragmatic Indian policy of multiple engagement,” Jaishankar observed.

Stating that much more daunting was India’s challenge in the face of demands generated by the Covid pandemic he said, the Vande Bharat Mission brought back millions of Indians from multiple countries through air, sea and land.

“It is, in fact, the largest recorded evacuation exercise in human history. The movement of the people itself was only the tip of the iceberg. Behind it were a complex set of activities that included organizing, gathering, testing, housing, even feeding those who are waiting to be repatriated,” the Minister stated.

“Starting first at Wuhan and then moving on to Italy and beyond, this involved an intensive engagement with the authorities local, provincial, national. And it covered everybody from tourists and students to professionals and workers, even pilgrims, fishermen and seafarers,” he alluded.

“And it was not just limited to Indians coming back; many staying abroad, in the Gulf for instance, were given support directly or by interceding with local Governments. Here too, the results of cultivation by political leaders and diplomats paid off,” Jaishankar reckoned.

Maintaining that an example in public health during the same period is equally instructive, he said when the first wave of Covid-19 hit India in 2020, we scrambled across the world to secure PPEs, masks and ventilators.

“And we did so in a seller’s market as the demand far exceeded supply. Ingredients for the pharmaceutical industry with escalating requirements were also greatly sought after. And commerce by itself was not adequate in such circumstances; in fact, contacts were needed for effective access,” EAM said.

“The second wave in 2021 saw a similar spike in demand for oxygen and specialised medicines from abroad. Locating, negotiating and contracting supplies became the priority for Indian diplomacy. And it really bent its back to deliver,” he mentioned.

Explaining that the four examples that he already shared, were products of extraordinary situations but they do illustrate what is an undeniable reality. Jaishankar said our daily life is increasingly influenced by what happens elsewhere, be they problems or be they solutions.

He noted that foreign policy matters not just in distress situations but could literally determine your security, your job, the quality of your life, and as we have discovered recently, even your health.

“It shapes what you hold dear: like pride, values, reputation and image. And for all these reasons and more, it is important that you take a greater interest in the world,” the External Affairs Minister informed.