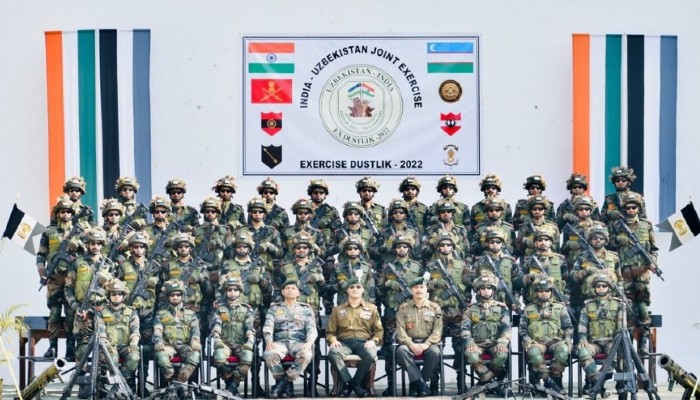 The Indian contingent comprises a platoon strength of Grenadiers Regiment.

An Indian Army contingent has reached Yangiarik in Uzebkistan to participate in the 3rd Edition of India-Uzbekistan biennial military training Exercise Dustlik that is being held from March 22-31.

A tweet by the Additional Directorate General of Public Information, IHQ of MoD (Army) on Wednesday said, “The Exercise focuses on Counter-Terrorism operations in semi-urban terrain under United Nations Mandate".

On Tuesday, a statement of the Ministry of Defence said that the Indian contingent comprises a platoon strength of Grenadiers Regiment. The Uzbekistan Army contingent is being represented by troops of the North Western Military District, it informed.

The last edition of Dustlik, which means 'friendship' in the Uzbek language, was conducted in Ranikhet (Uttarakhand) in March last year.

The training schedule will focus primarily on sharing of tactical level drills and learning of best practices from each other, the defence ministry said.

The exercise aims at enhancing understanding, cooperation and interoperability between two armies.

The exercise will culminate in a 24 hour long validation exercise which will be a test bed for the soldiers of both armies as they would be undergoing the challenges of simulated operations in such scenarios.

According to the statement, the Grenadiers battalion nominated for the exercise is one of the highly decorated battalions of Indian Army and has the unique distinction of participating in almost all the Pre and Post Independence Operations.

The unit has been awarded eight Pre-Independence Battle Honours.
Post-independence, it has earned theatre honour ‘RAJASTHAN’ in the1965 war and battle honour ‘JARPAL’ in the 1971 war, the statement added.