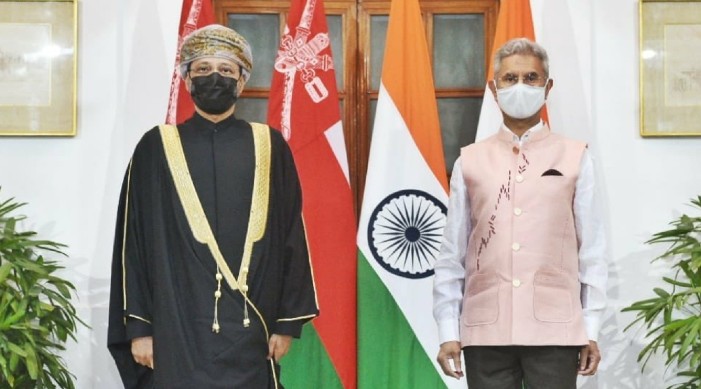 India and Oman have reaffirmed their commitment to the close Strategic Partnership between the two countries.

During delegation level talks held on Wednesday, External Affairs Minister S Jaishankar and Foreign Minister of the Sultanate of Oman Sayyid Badr bin Hamad bin Hamood Albusaidi highlighted the high priority accorded by the leadership of both the countries to bilateral relations based on high mutual trust and respect, the Ministry of External Affairs (MEA) said.

The Ministers underscored that as neighbors united by the waters of Arabian Sea, both the countries have an important role in the maritime safety and security in the region, the MEA said.

This is the first visit of Sayyid Badr bin Hamad bin Hamood Albusaidi to India after his appointment as the Foreign Minister of Oman in August 2020.

According to the MEA, both the Ministers recalled the immense contribution of Late His Majesty Sultan Qaboos bin Said in the development of close strategic partnership between both the countries.

The Ministers applauded the conferment of Gandhi Peace Prize for the year 2019 on Late His Majesty Sultan Qaboos bin Said by Government of India as recognition of his visionary leadership, his efforts to promote peace as well as his immense contribution in strengthening India-Oman friendship, the MEA said.

They noted that while the traditional areas of cooperation are being further strengthened, new drivers of growth are expanding bilateral cooperation with new vigor and energy. Both Ministers welcomed the decision to expeditiously implement proposals for joint cooperation in space, mining, maritime and science & technology sectors, the MEA said.

According to the MEA, both sides noted with satisfaction:

* Holding of Foreign Office Consultations; visit of India’s Chief of the Naval Staff to Oman

Both the Ministers welcomed the continued and sustained engagements under bilateral mechanisms in various fields between both the countries and agreed for holding the Joint Commission Meeting at the level of Commerce Ministers, India-Oman Strategic Consultative Group Meeting (Foreign Office Consultations), Strategic Dialogue and JWG on Labor at an early date.

The Ministers noted with satisfaction the continued momentum in defence cooperation as it remains one of the key pillars of the bilateral cooperation. Both the Ministers welcomed the timely renewal of longstanding MoUs on military cooperation & maritime issues between India and Oman.

The Ministers welcomed the holding of the 11th Joint Military Cooperation Committee Meeting (JMCC) in New Delhi in February 2022 which was co-chaired by Defence Secretary of India and Secretary General of the Ministry of Defence of Oman.

Attesting to the trust and closeness in defence cooperation, Secretary General of the Ministry of Defence of Oman became the first foreign dignitary to embark on India’s Indigenous Aircraft Carrier - Vikrant.

Both the leaders noted that the first visit of the incumbent Commander of the Royal Navy of Oman (CRNO) to India in February 2022 will help in deepening cooperation between the Indian Navy and the Royal Navy of Oman. It was agreed to initiate the exchange of White Shipping information expeditiously to increase the maritime domain awareness of both the countries.

EAM Jaishankar thanked the Omani side for taking excellent care of the large Indian community in Oman during the pandemic and lauded the cooperation between the countries during COVID pandemic.

According to the MEA, he noted that Oman was the first country in the region to accord approval to indigenously developed COVAXIN attesting to the close and friendly relations between both the countries.

The Ministers expressed gratitude to each other’s countries for timely assistance during the pandemic. India’s assistance in supplying critical medicines, including Hydroxychloroquine and COVID vaccine and Oman’s assistance in providing ventilators, oxygen concentrators and other critical equipment during India’s second phase, was a humanitarian gesture well-received by both Sides.

They noted that the Air-bubble arrangement has served the interim travel needs of citizens of both countries. The Ministers welcomed the forthcoming resumption of scheduled commercial passenger flights to their pre-pandemic capacity as per the bilateral air service agreement.

The Ministers noted with satisfaction that the bilateral trade was not adversely affected during the pandemic and agreed that there is significant potential to enhance bilateral trade in tune with the depth of India-Oman strategic partnership.

They underscored the need to enhance momentum in trade and investment linkages as the economies of both the countries show strong signs of post-pandemic recovery.

The Ministers welcomed the progress and cooperation in resolving trade barriers in respect of critical agro commodities. Both Ministers noted with satisfaction that several investment ideas continue to progress, and agreed to pursue opportunities in areas such as renewable energy, green hydrogen, green ammonia etc, the MEA said.

Noting the synergy between the National Green Hydrogen Mission launched by Prime Minister Narendra Modi and the vision of His Majesty Sultan Haitham Bin Tarik to position Oman as a global hub for green Hydrogen and green Ammonia, it was agreed to enhance cooperation in this area.

According to the MEA, the ministers agreed to finalize negotiations of the bilateral protocol on Investment and Avoidance of Double Taxation and the Prevention of Fiscal Evasion with respect to Taxes on Income (DTAA) at an early date in a spirit of mutual understanding.

During the talks, both Ministers attested to the strong potential of cooperation in renewable energy sector under the Green Grids Initiative – One Sun One World One Grid.

According to the MEA, the Ministers also exchanged views on recent regional developments as well as global issues of mutual interest. They affirmed their keenness to work together in regional and international organizations and forums in order to achieve their common interests.

They thanked each others governments for consistently supporting their respective candidatures at various international organizations.

The Ministers welcomed the signing of the MOU between India Post and Oman Post for issuance of India-Oman Joint Commemorative Stamp. The joint stamp will highlight the millennia old shared cultural heritage between both countries and will be released in the last quarter of this year.

Both Ministers welcomed the signing of the Program of Scientific and Technological cooperation between the two countries within the joint committees programs, the MEA said.