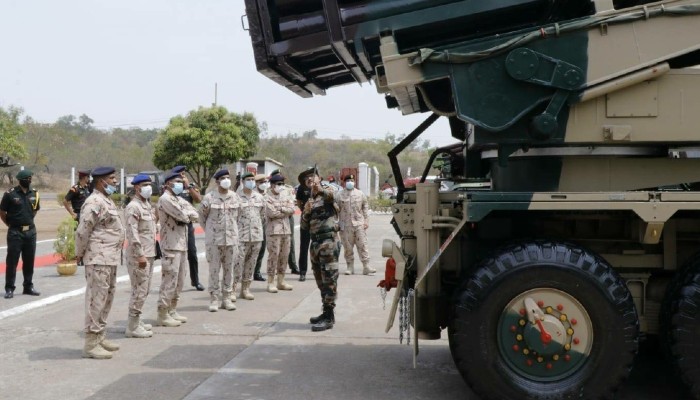 A delegation of the UAE Army visiting an Indian Army establishment on Tuesday.

A delegation of the United Arab Emirates (UAE) Army on Tuesday began six days of visits to Indian Army training establishments with the aim to enhance defence cooperation engagements between the two armies.

The delegation will also attend the inaugural Army-to-Army Staff Talks (AAST) on 25th and 26th March, said the Ministry of Defence after the delegation's arrival on Tuesday.

The Staff Talks will take place at the College of Military Engineering, a technical and tactical engineering training institution of the Indian Army Corps of Engineers.

The agenda for the inaugural AAST include issues related to military training, increase in course subscription in Indian Army establishments, conduct of bilateral exercises and enhancing defence technical cooperation.

According to the defence ministry, the delegation will be visiting Army establishments in Maharashtra state.

Local establishments which will receive the delegation include the School of Artillery, the Armoured Corps Centre and School, the Mechanised Infantry Centre and School, the National Defence Academy, the Command Hospital of the Army Southern Command, the Army Institute of Physical Training, the Military Intelligence School and Depot and the Bombay Engineers Group and Centre.

Among the private companies having sizable defence manufacturing capacities to be visited by the UAE delegation are Larsen & Toubro Limited and Tata Motors Limited in Pune.