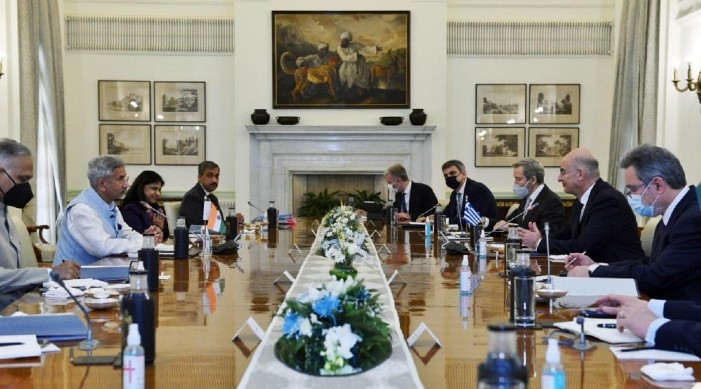 Delegation level talks were held in New Delhi on Wednesday.

The two sides discussed the possibility of enhancement of the bilateral relationship to a Strategic Partnership, the MEA said.

Both sides shared views on regional and global issues of mutual interest in the context of new geo-political and geo-economic realities.

“Developments pertaining to the European Union, Eastern Mediterranean, Afghanistan and Ukraine were discussed,” the MEA said.

The Greek Foreign Minister also handed over the Instrument of Ratification of Greece as a signatory to the Framework Agreement on International Solar Alliance.

This was the Greek Minister's first visit to India.

The two Ministers expressed hope that the 8th round of Joint Economic Committee Meeting scheduled at Athens on 15 April 2022 will provide further impetus to trade and investment ties, the MEA said.

“They appreciated that trade has shown a significant increase, and has crossed US$ 1 billion despite the challenges posed by the pandemic,” it added.

According to the MEA statement, both sides agreed to work together to further enhance collaboration in mutually beneficial sectors such as shipping & maritime, information technology, agriculture, new & renewable energy, and pharmaceuticals.

The two sides conveyed their deep commitment to multilateralism, and a rules-based international order.

“They reaffirmed the importance of the urgent reform of the UN. It was also agreed that the next round of Foreign Office Consultations would be scheduled soon,” the MEA statement maintained.

Both sides noted the importance of movement of people in an orderly and legal way and signed a Declaration of Intent on Migration and Mobility.

“Considering their rich ancient past, the two sides agreed to continue their relationship in the field of culture and education. A Cultural and Education Exchange Programme for the five year period 2022-2026 was signed during the visit,” the statement maintained.

Detailed discussions were held on the importance of keeping oceans free and open for movement and trade. Both sides also underlined the need to support and adhere to the Laws of the Seas (UNCLOS), the MEA said.

India and Greece share close and friendly ties, which are based on shared values of democracy, freedom and rule of law.

“Our bilateral relations are marked by rich civilizational linkages. These ties are characterized by frequent high-level visits including that of Hon’ble President of India to Greece in 2018, Greek FM to India in 2017 and EAM’s visit to Greece in June 2021,” the MEA statement further said.

“The visit of Foreign Minister of Greece has contributed to sustaining the momentum of high-level exchanges aimed towards further consolidating the bilateral relations between India and Greece,” the MEA stated.