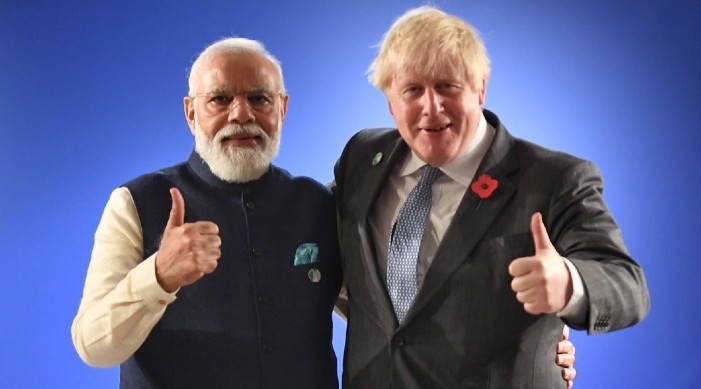 Prime Minister Narendra Modi spoke on phone with UK Prime Minister Boris Johnson on Tuesday and had a detailed discussion on the situation in Ukraine.

Prime Minister Modi reiterated India’s consistent appeal for cessation of hostilities and a return to the path of dialogue and diplomacy.

He emphasized India's belief in respect for international law and the territorial integrity and sovereignty of all states, as the basis of the contemporary world order, the Prime Minister's Office (PMO) said after the call.

The two leaders also discussed issues of bilateral interests and agreed on the potential of further deepening cooperation in various areas including trade, technology, investments, defence & security, and people-to-people relations.

According to the PMO, Prime Minister Modi expressed his satisfaction at the positive momentum in the ongoing negotiations on the bilateral Free Trade Agreement. He also appreciated the progress in implementing the 'India-UK Roadmap 2030' adopted during the Virtual Summit between both leaders last year.

The Prime Minister conveyed his desire to welcome PM Johnson in India at an early date, as per mutual convenience.