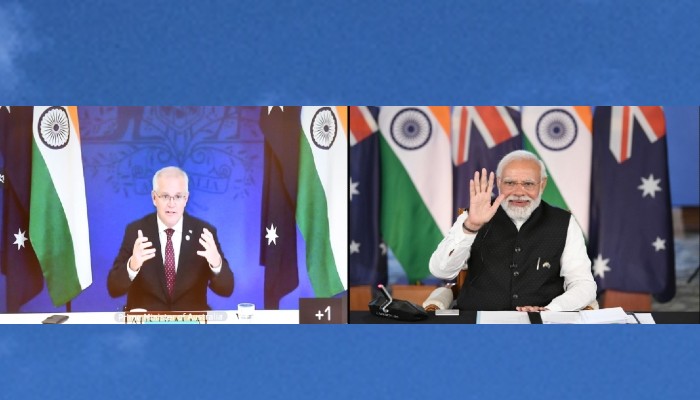 Prime Minister Narendra Modi and Australian Prime Minister Scott Morrison on Monday said that strong India-Australia bilateral relations were important not only from the bilateral but also from the perspective of Quad format.

“Both leaders referred to that strong bilateral relations were important not only from a bilateral perspective but also under the QUAD format calling it a factor of stability in the Indo-Pacific," Foreign Secretary Harsh Vardhan Shringla said during a Special Briefing on the 2nd India-Australia Virtual Summit held between the the two leaders.

He said that the Summit saw “fruitful, constructive and warm exchange of views.”

“The virtual summit reflects the close ties that exist between India and Australia as also the shared vision of the Prime Ministers to advance this bilateral partnership,” Shringla added.

“Both Prime Ministers, stressed on the high priority that they attach to the bilateral relationship and the key focus to enhance further the Comprehensive Strategic Partnership between the two countries,” he further said.

Noting that the last summit meeting between the two countries was held virtually in June 2020, Shringla said Monday’s Summit gave an opportunity to the two leaders to review the bilateral relationship in that intervening period and also to take stock of the Comprehensive Strategic Partnership framework and the regular hi-level engagements that have been held between the two countries.

According to the Indian Foreign Secretary, the hour-long summit covered the entire range of bilateral issues.

“The wide-ranging discussion also covered the regional and multilateral issues of interest. PM Modi indicated that as two democracies, India and Australia had similar goals and aspirations,” he informed.

“The agenda of the meeting covered the status of various new initiatives and mechanisms agreed under the Comprehensive Strategic Partnership,” he added.

“The Prime Ministers exchanged views on how COVID-19 had impacted across the globe and our respective responses and cooperation in critical areas such as health, vaccines, cyber and emerging technologies and supply chains,” Shringla recalled.

“In a reiteration for commitment to a progressive Indo-Pacific region, both leaders discussed calibrating and cooperating with each other on support to Pacific Island countries for humanitarian assistance and disaster relief and in combating climate change through initiative like the International Solar Alliance, the Coalition of Disaster Resillient Infrastructure,” he explained.

“The leaders exchange perspectives about regional and multilateral matters and global issues of mutual interests including shared concerns such as terrorism,” the Foreign Secretary said.

“Australian PM appreciated the significant presence of a large diaspora in Australia. He stressed on the importance attached by Australia to its relations with India,” he further stated.

“There was a sense that our cooperation had extended to sectors across the board and in particular in terms of investments, critical minerals, clean energy, water and agriculture,” Shringla said.

“There was a call for facilitating migration and mobility for students and professionals between the two countries. A sense prevailed that two important areas for partnership related to people-to-people contacts especially the youth in terms of education and tourism exchanges,” he maintained.