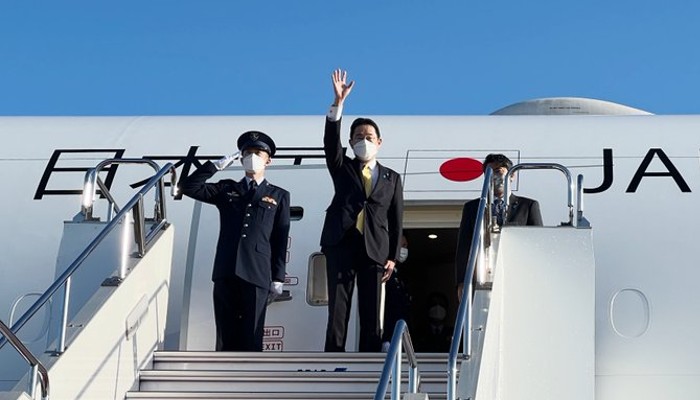 Japanese Prime Minister Fumio Kishida who arrived in New Delhi on Saturday for the India-Japan annual summit, condemned Russia’s invasion of Ukraine, stating it is a “clear violation of international law as well as an attempt to unilaterally change the status quo by force, and it is totally unacceptable.”

The visit, which is the first by a serving Japanese Prime Minister in four-and-half-year, has taken place at the time, when Russian attacks on Ukraine have created an atmosphere of uncertainty in the world with its effect looming large on trade and economy. The war has already claimed thousands of lives with millions now displaced internally within Ukraine and millions more leaving the country due to the war.

Writing an article in Indian Express, the Japanese Prime Minister said, “Upholding the core principles of the international order is indispensable from the perspective of diplomacy and security in the Indo-Pacific, where the situation has been rapidly worsening. Japan will unite with the international community and take resolute actions.”

He further added, “In the recent Japan-Australia-India-U.S.(Quad) Leaders’ Video Conference, in which Prime Minister Modi and I participated, we concurred that any attempt to unilaterally change the status quo by force, such as this time, must not be tolerated in the Indo-Pacific region, and that it is precisely because of this situation that it is critical to further promote efforts toward the realization of a ‘Free and Open Indo-Pacific’.”

During his meeting with Prime Minister Modi, the Japanese Prime Minister who has visited India earlier too in his capacity as the East Asian country’s Foreign Minister, will discuss issues related to bilateral, regional and global importance.

The two sides had signed a Digital Partnership in October 2018. Collaboration in startups has emerged as a vibrant aspect under this Partnership. Till date Indian startups have raised more than USD 10 billion from Japanese VCs. India and Japan have also launched a private sector driven fund-of-funds to invest in technology startups in India which has raised USD 100 million so far.

Both sides also have Cooperation in the field of ICT, in areas such as 5G, under-sea cables, telecom and network security. Workshop on 5G was held. Progress has also been made in skill development.

The total number of Japan-India Institutes of Manufacturing (JIM) now is 19 (it was 8 in 2018). These institutes are established by Japanese companies based in India for training skilled workers. Japanese companies have also set up 7 Japanese Endowed Courses (JEC) at various colleges.

As many as 220 Indian youth are placed in Japan as interns under Technical Intern Training Programme (TITP). Last year we also signed a Specified Skilled Workers Agreement. The Japanese side has since January this year started examinations for nursing care under this programme.