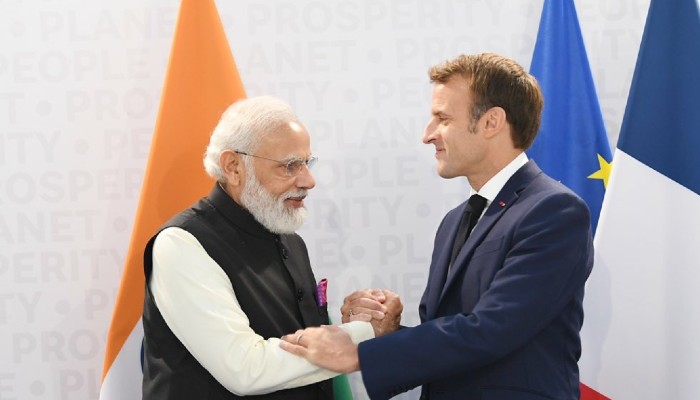 India and France are at the forefront of the call for peace, dialogue and diplomacy

Foreign Secretary Harsh Vardhan Shringla on Wednesday said that Prime Minister Narendra Modi and French President Emmanuel Macron were among the few leaders who are in regular contact with the leaders of Russia and Ukraine and continue to maintain an open channel of communication with them.

Addressing the India-France Track 1.5 Dialogue on ‘Innovation, Sustainability and Multilateral Cooperation’, he said that the global strategic outlook appears complicated and the post-World War II security architecture that had largely preserved peace in Europe over the last several decades is now found to be wanting.

“This scenario calls for mature partnerships to steady the course.” Shringla said. “It is, therefore, only apt that India and France, which have always sought, and succeeded, in maintaining strategic autonomy, are at the forefront of the call for peace, dialogue and diplomacy,” he added.

Maintaining that India and France have been longstanding friends and strategic partners, India’s top diplomat said, as resident powers of the Indo-Pacific, they have a shared understanding of the challenges, opportunities and stakes in the region.

“The bilateral relationship has been dominated by cooperation in traditional fields such as defence and security, science and technology, space and cultural contact,” he held.

“Both countries understand this very well, which is why they are rapidly expanding their cooperation to non-traditional areas, such as, digital, cybersecurity, green energy and sustainable development,” he said.

“The world had to face its biggest non-traditional threat in decades in the form of the COVID-19 pandemic,” the Foreign Secretary recounted.

“In response, India and France worked in coordination and collaboration, helping each other out in difficult times, while also contributing to global efforts to fight the pandemic, whether in the form of financial assistance or through the supply of life saving drugs, especially vaccines,” he informed.

The theme of ‘Innovation, Sustainability and Multilateral Cooperation’ comes at an opportune moment when India and France are making rapid strides in key traditional and non-traditional strategic areas, Shringla said.

“The first of these is digital and cybersecurity. In August 2019, India and France adopted a Roadmap on Cybersecurity and Digital Technology, which lays down our common vision for cooperation in a domain which we see as foundational for the 21st century,” he mentioned.

“We have a robust cyber dialogue where we discuss bilateral and multilateral cooperation on digital and cyber issues,” Shringla stated.

“On practical aspects too, we have excellent cooperation as can be seen in the successful development of India’s fastest supercomputer ‘Param-Siddhi-AI’ under the National Supercomputing Mission (NSM) by India’s Centre for Development of Advanced Computing or C-DAC and the French company Atos,” he added.

“There is also an increasing realisation that the 5G networks that are coming up in the two countries have to be safe and secure and that both India and France are committed to finding solutions to risks associated with 5G technology,” India’s top diplomat said.

“Similarly, India and France have been early movers on clean energy with a long standing cooperation in civilian nuclear power and the Jaitapur Project where we are determined to make progress,” he held.

Further, the maturity of our energy cooperation and multilateral partnership is reflected in our co-founding of the International Solar Alliance, which aims to establish solar energy as a preferred solution for governments to achieve energy transition, particularly in the most vulnerable parts of the world, Shringla added.

“Another emerging area of energy cooperation for our two countries is Green Hydrogen,” he stated.
France is among the key European players in this area having announced a green hydrogen strategy and committed to investing €7.2 billion up to 2030 to deploy this strategy, the Foreign Secretary mentioned.

“India too has launched an ambitious National Hydrogen Mission, which will contribute to the five key climate targets or the Panchamrit that our Prime Minister announced at the COP26 Summit last year,” he informed.

“As we commit to closer cooperation in the Indo-Pacific, we are also finding new grounds to cover,” the Foreign Secretary said.

“For instance with the adoption of the ‘Roadmap on Blue Economy and Ocean Governance’, India and France will facilitate cooperation between economic players in the blue economy space, cooperation on ocean science and find ways to work together on sustainable maritime infrastructure,” he explained.

“In the multilateral sphere, India and France have made a call for a legally binding Treaty on Protecting Biodiversity Beyond National Jurisdiction (BBNJ), through the High Ambition Coalition,” Shringla said.

“We have also jointly launched an Indo-Pacific Parks Partnership that aims to enable the exchange of best practices and knowledge between park managers,” he informed.

“There are infinite possibilities in the India-France Strategic Partnership as we continue to push the boundaries to be a force for global good,” he recounted.
“The India-France relationship is truly a partnership for the 21st century,” Shringla said.