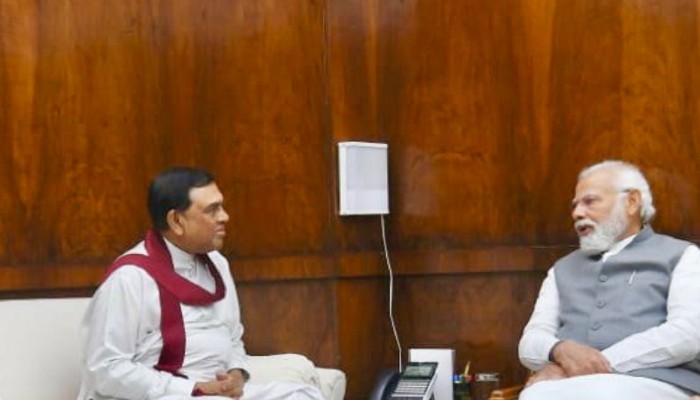 Sri Lankan Finance Minister Basil Rajapaksa called on Prime Minister Narendra Modi in New Delhi on Wednesday and thanked him for India’s assistance to Sri Lanka at a critical time.

PM Modi stated that India would always stand with Sri Lanka, a close friendly neighbour, said a statement of the Sri Lankan High Commission in India.

Finance Minister Basil Rajapaksa is on a two-day visit to follow-up on the short and medium-term economic cooperation measures that were agreed during his visit to India in December last year.

The meeting between the Prime Minister of India and the Finance Minister of Sri Lanka, at the former's office in the Parliament House, was held in an extremely cordial manner, the statement said.

At the outset, Finance Minister Rajapaksa thanked Prime Minister Modi for all the assistance that India has provided to Sri Lanka at this critical time.

According to the statement, the two dignitaries discussed a wide range of issues pertaining to the bilateral relationship during the call. These included agriculture, renewable energy, digitalization, tourism and fisheries among others.

Prime Minister Modi highlighted the advantages of natural farming and India’s experience in developing related techniques and products, including nano-fertilizers, which could be of relevance to Sri Lanka.

The two also agreed that cooperation in development of renewable energy in Sri Lanka is mutually beneficial and that it should be pursued with vigour, the Sri Lankan statement said.

With reference to India’s expertise in unique digital identity and the proposal for bilateral cooperation for Government of Sri Lanka’s similar programme, it was stressed that such identity could serve as a platform for providing common people with access to various services, it further stated.

The significance of promoting the Ramayana trail in Sri Lanka and Buddhist circuit in India, including in Gujarat, was highlighted for attracting a large number of Indian tourists to Sri Lanka, the Sri Lankan statement said.

In this context, specific reference was made to the MOU on tourism, signed between Sri Lanka and the State of Gujarat in 2009, which could serve as a template to promote tourism at the state level.

Prime Minister Modi and Minister Rajapaksa had a comprehensive discussion on the fisheries issue between the two countries and recognized its complex and multidimensional aspects including humane treatment of fishermen, livelihood, enforcement, ecology of the ocean, early release of arrested fishermen and their boats etc, the statement said.

They also agreed on the urgent need to find a lasting solution to this complex issue, it further added.