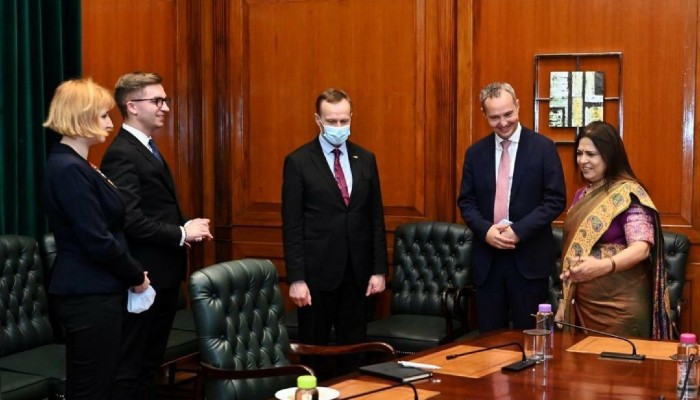 A Lithuanian delegation calls on Minister of State for External Affairs and Culture Meenakashi Lekhi in New Delhi on Wednesday.

India has requested Lithuania to recognise Covaxin and to consider a mutual recognition agreement on Covid-19 vaccination certificates.

The request came during the 8th round of Foreign Office Consultations (FOC) between India and Lithuania held in New Delhi on Wednesday.

The issues discussed included the need for greater mobility between both countries, including movement of students and professionals.

The Indian side took note of the ‘Start Up Visas’ and ‘Blue Card’ initiatives of the Lithuanian government to further facilitate the movement of business persons and professionals, the Ministry of External Affairs said.

The Foreign Office Consultations provided an opportunity to discuss the entire gamut of bilateral relations, including high level visits.

Both sides exchanged views on regional and global issues of mutual interest, including Afghanistan, Indo-Pacific, India-EU Partnership and the Ukraine situation.

The Lithuanian Delegation also paid a courtesy call on Minister of State for External Affairs and Culture Meenakashi Lekhi and Secretary (West) Sanjay Verma. Both sides agreed to hold the next round of the Foreign Office Consultations in Vilnius on a mutually convenient date.

India and Lithuania share warm and friendly relations based on shared values of democracy, freedom, rule of law and respect for human rights.

The year 2022 is of great significance as it marks 30 years of establishment of diplomatic relations which also coincides with the celebrations of the Azadi Ka Amrit Mahotsav.