PM Modi hails efforts of everybody involved in Operation Ganga 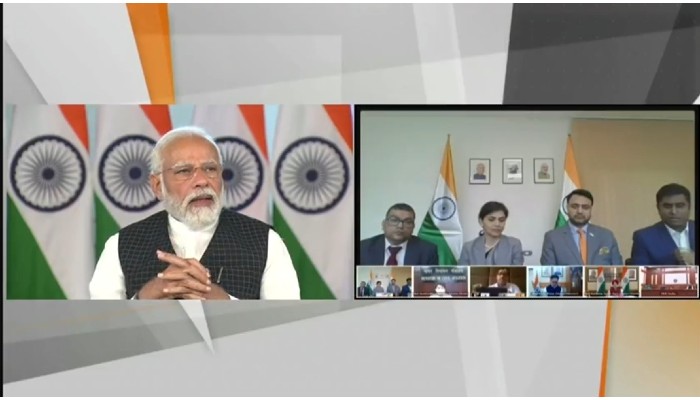 We remain committed to ensure the safety and well-being of Indians in distress abroad, PM Modi said.

Meanwhile, three Indians stranded in Ukraine's Kherson have been evacuated via Simferopol and Moscow

Prime Minister Narendra Modi has hailed the efforts of all those who were involved in Operation Ganga to evacuate Indian nationals from war-hit Ukraine.

Operation Ganga successfully evacuated about 23,000 Indian citizens, as well as 147 foreign nationals belonging to 18 countries, from Ukraine, the Ministry of External Affairs (MEA) said after the interaction on Tuesday evening.

During the interaction, representatives of the Indian Community and private sector in Ukraine, Poland, Slovakia, Romania and Hungary narrated their experiences of being part of Operation Ganga, the challenges they faced, and expressed their sense of satisfaction and honour at having contributed to such a complex humanitarian operation.

According to the MEA, Prime Minister Modi expressed his warm appreciation for Indian community leaders, volunteer groups, companies, private individuals and government officials who worked tirelessly for the success of the operation.

He praised the patriotic fervor, the sense of community service, and the team-spirit displayed by all stakeholders involved in Operation Ganga. Prime Minister especially praised the various community organisations, pointing out that their selfless service exemplifies the Indian civilizational values that they continue to embody even in foreign shores.

Speaking about the efforts made by Government to ensure the safety of Indian nationals during the crisis, Prime Minister recalled his personal interactions with leaders of Ukraine and its neighbouring countries, and expressed gratitude for the support received from all the foreign governments.

Reiterating the high priority that the government attaches to the safety of Indians abroad, the Prime Minister recalled that India has always acted with alacrity to assist its citizens during any international crisis.

"Interacted with Indian community organizations, civil society and volunteer groups involved in @opganga. Collective efforts ensured the safe return of about 23,000 Indians from Ukraine. We remain committed to ensure the safety and well-being of Indians in distress abroad," PM Modi said on Twitter.

Meanwhile, three Indians stranded in Ukraine's Kherson have been evacuated via Simferopol and Moscow.

They boarded their flight from Moscow a short while ago and the Indian Embassy in Russia have facilitated their transit and accommodation en route, the MEA said on Tuesday evening.

Earlier in the day, External Affairs Minister S Jaishankar had informed the Rajya Sabha that despite the challenges posed by the serious ongoing conflict, India ensured that about 22,500 citizens returned home safely from Ukraine.

In a suo motu statement, Jaishankar said, "Operation Ganga is a testimony of our commitment to ensure that Indians in distress situations abroad can count on their Government".