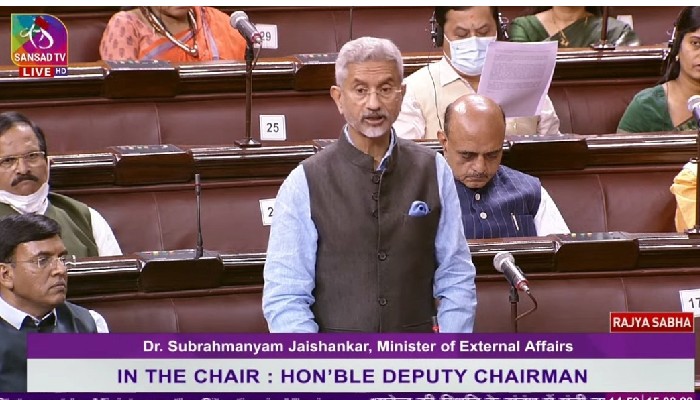 EAM S Jaishankar makes a statement on the situation in Ukraine in the Rajya Sabha on Tuesday. (Courtesy: Sansad TV)

Indians in distress situations abroad can count on their government, the minister said

External Affairs Minister S Jaishankar on Tuesday said that despite the challenges posed by the serious ongoing conflict, India ensured that about 22,500 citizens returned home safely from Ukraine.

In a suo motu statement in the Rajya Sabha on the ‘Situation in Ukraine’, Jaishankar said, "Operation Ganga is a testimony of our commitment to ensure that Indians in distress situations abroad can count on their Government".

“At the direction of the PM, we launched Operation Ganga, thereby undertaking one of the most challenging evacuation exercises during an ongoing conflict situation. Our community was dispersed across Ukraine, posing its own logistical challenges,” he stated.

“Pertinent to note that hostilities placed the Indian community of 20,000 plus in direct danger. Even while we were participating in global deliberations of this evolving situation in UNSC, pressing challenge was to safeguard our citizens and ensure that they weren't in harm's way,” the minister noted.

“The exercise was undertaken at a time when military actions, including airstrikes and shelling, were underway. It involved movement in a war-torn situation in a large country, at times over a 1000 kms and required exiting border checkpoints clogged by an estimated 26 lakh refugees,” he said.

According to Jaishankar, the Ministry started reinforcing the strength of the Indian Mission in Ukraine in anticipation of a difficult situation.

“Additional Russian-speaking officers were deputed to Kyiv on 22 February to our Embassy. To keep in constant touch with distressed Indian nationals in Ukraine and their families in India, a Situation Room was established in Delhi on 16 February,” he mentioned.

“The strategy for evacuation was to take out Indian nationals from the western neighboring countries of Ukraine that were Poland, Slovak Republic, Hungary, Romania and Moldova. This was necessitated due to the closure of Ukrainian airspace on 24 February,” Jaishankar stated.

“To carry this out, we were required to strengthen our Missions in these countries so that they could deploy teams at the border points, set up transit camps, operate effective control rooms and facilitate the large number of air flights,” he said.

“Along with that, they also handled incoming humanitarian assistance,” the Minister added.

He informed Rajya Sabha that under Operation Ganga, 90 flights have been operated, out of which 76 were civilian flights and 14 were Indian Air-force flights.

The evacuation flights were from Romania, Poland, Hungary and Slovakia, the Minister said.

He mentioned how Prime Minister Narendra Modi spoke to Russian president Vladimir Putin and Ukrainian president Volodymyr Zelenskyy and discussed the evacuation of Indian nationals in warzones Kharkiv and Sumy in the eastern region of Ukraine.

The most challenging part of the evacuation exercise was that of evacuating Indian nationals from Kharkiv and Sumy, Jaishankar said.

“Both the places witnessed heavy shelling and air strikes. Many options were worked out to evacuate students through buses and trains,” he said.

“A team from our Embassy in Moscow had also been sent to the Russia-Ukraine border to facilitate the possible evacuation of Indian students through Belgorod and Kursk,” he mentioned.

“Many students from Kharkiv were moved to Pesochin in view of anticipated escalation of hostilities. While our efforts were able to stave off some of the more extreme scenarios, their presence in a safety zone allowed for subsequent ferrying through buses to the western borders,” Jaishankar said.

“The Sumy evacuation, which was the last one on a significant scale, was also extremely complex as our students faced the prospect of being caught in crossfire. Their evacuation from the city needed a credible ceasefire, a daunting challenge in the current situation,” he explained.

“This finally materialized due to the personal intervention of the Prime Minister himself with the Presidents of Ukraine and Russia. Noting the extraordinary challenges before us, we also dispatched a special team of senior officers to the vicinity of Sumy,” Jaishankar said.

During the entire period, Indian Embassy in Ukraine has been working incessantly to contact Indian nationals, arranging and facilitating transport, coordinating with local authorities, providing food etc, he said.

“In line with India’s principle of ‘Vasudhaiva Kutumbakam’, foreign nationals were also evacuated from conflict zones and brought to India. They included about a 150 citizens, 147 to be exact of 18 countries, among them our immediate neighbours like Bangladesh and Nepal,” Jaishankar told Rajya Sabha.