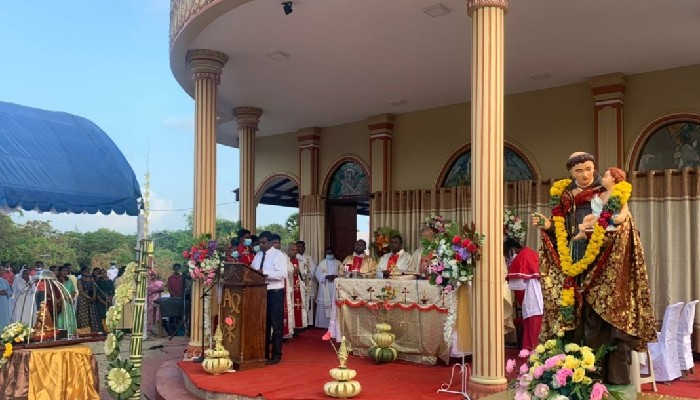 A special mass was held during the annual festival.

Underlining the deep people-to-people linkages between India and Sri Lanka as well as enduring cultural ties, close to 100 Indian pilgrims, comprising mainly fishermen and priests, took part in the annual festival at St. Anthony’s Shrine in Kachchateevu in Jaffna.

A similar number of pilgrims from Sri Lanka also took part in the restival held on Friday and Saturday, said a statement issued by the Indian High Commission in Sri Lanka.

Consul General of India, Jaffna Raakesh Natraj and other officials of the Consulate were special invitees. Fisheries Minister of Sri Lanka Douglas Devananda had greeted the pilgrims on their arrival at the Island.

A special mass dedicated to St. Anthony of Padua, the patron Saint of Fishermen, was conducted by priests from India and Sri Lanka on Saturday.

This was followed by the traditional feast, said the Indian High Commission. The church flag was also hoisted as a part of the festivities.

The annual festival witnesses enthusiastic participation of Indian pilgrims every year. More than 3000 pilgrims from India participated in 2020.

These Indian pilgrims are extended consular and other forms of assistance by the Consulate General of India in Jaffna.

The Indian High Commission's statement pointed out that there was no participation last year as the festival was not held due to Covid-19. Limited participation was permitted this year for the festival, which was held in accordance with Covid protocols.

Participation of fishermen from the two countries paves the way for close interaction between them and provides an opportunity to know each other and their problems better.

The mainstay of the centuries-old connect has been such interactions and close bonds between the peoples of the two close maritime neighbours, the Indian High Commission in Sri Lanka addded.