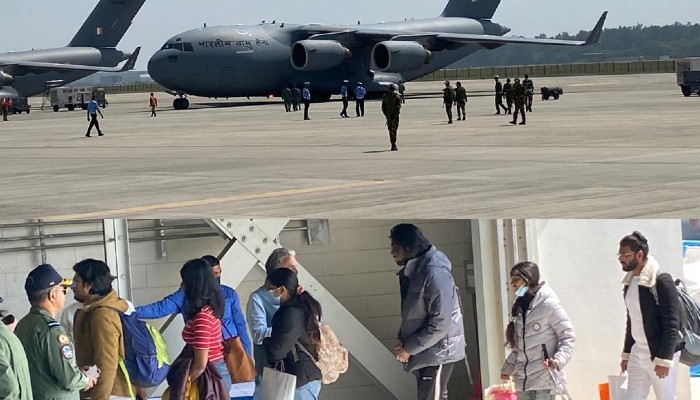 Four Nepali citizens were evacuated by India from war-hit Ukraine

Taking to twitter, the Nepali PM informed that four Nepali nationals have just arrived in Nepal from Ukraine via India.

“Thank you Prime Minister Narendra Modi and the Government of India for the assistance in repatriating Nepali nationals through the Operation Ganga,” said PM Deuba in his tweet.

As of March 11, a total of 22,500 Indians, mainly students, have been brought back under Operation Ganga in over 90 special flights from the Ukraine borders, the Ministry of External Affairs said.

On Friday, around 600 Indian students on board IAF aircraft landed at the Hindon Indian Air Force Base.

These students were evacuated through a humanitarian corridor, from the war torn Ukrainian city of Sumy.

The students used the humanitarian corridors to reach the borders of Poland from where they boarded the special flights to India.

External Affairs Minister S Jaishankar in a statement had said on Friday that the evacuation of students from Sumy who returned was particularly challenging.

He thanked everyone associated with the evacuation process and Operation Ganga.

Jaishankar expressed gratitude to the authorities in Ukraine and Russia as well as the Red Cross for the evacuation assistance.

Also on Friday, the MEA twitter handle shared a video giving a look at what it takes to undertake a massive evacuation exercise in a conflict zone.

“24 February- A situation of conflict and hostilities arose in Ukraine,” said the script accompanying the video.

“Earlier, in view of the tensions building up, our embassy in Kyiv advised Indians to consider leaving Ukraine temporarily,” it informed.

“As the hostilities commenced, Ukranian air space closed down on 24 February,” the video script read.

According to the video script, the Indian government’s topmost priority was to evacuate them safely.

“The challenge was to move students to Western Ukraine and further to its neighbouring countries for onward flights to India,” it explained.

“Set up a 24*7 control room at MEA, Supplemented by a dedicated twitter handle, four control centres to facilitate border crossing and expanded strength of our embassies and deployed teams at the borders to facilitate evacuation from Poland, Slovakia, Hungary, Romania and Moldova,” it maintained.

“Particularly challenging was the evacuation from active conflict zones in Kharkiv and Sumy,” it added.

“A local ceasefire, buses and special trains brought 600 students stuck in Sumy to Poland and finally back home,” the video said.

“Under Operation Ganga over 90 flights were arranged. Till date over 22,500 Indians have returned home safely,” it further stated.