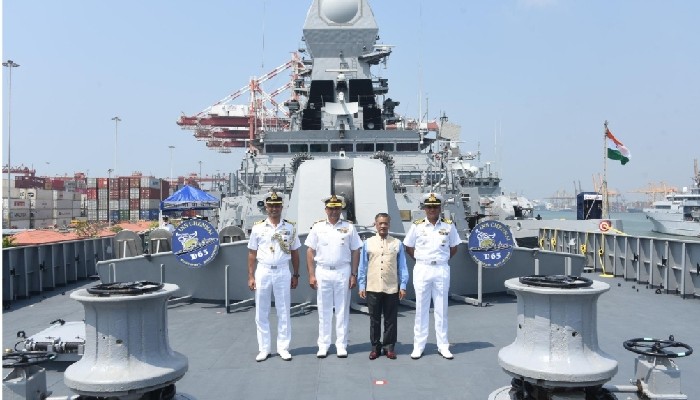 Two ships of the Indian Navy's Western Fleet, INS Chennai and INS Teg, made a port call at Colombo, Sri Lanka, on Thursday for a two-day visit.

They were received by the Officer of the Guard (OOG) and the Sri Lanka Navy band.

Many working level interactions are scheduled between naval personnel of the two countries, followed by familiarisation tour of Galle and Kandy for Indian Navy personnel, visits of Sri Lanka Navy personnel, school children and local visitors onboard Indian warships.

In addition, an interaction between operational teams of the two navies is also scheduled to finalise the schedule of Maritime Partnership Exercise on Saturday.

Upon arrival, Rear Admiral Sameer Saxena, NM, Flag Officer Commanding Western Fleet (FOCWF) visited the IPKF memorial to pay homage to the soldiers that sacrificed their lives for peace in the region. The memorial is also testimony to the inextricable ties between the people of India and Sri Lanka.