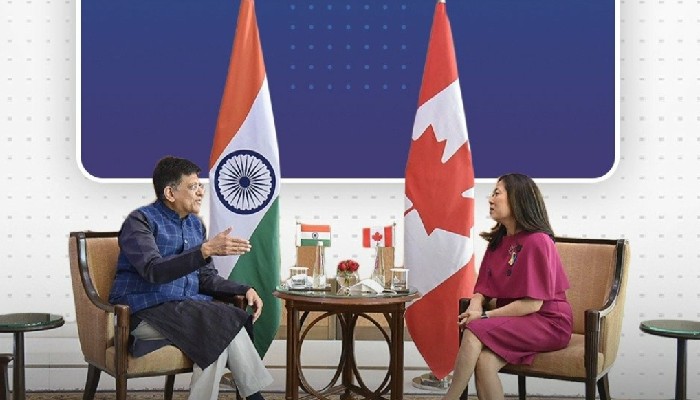 India and Canada have agreed to formally re-launch the negotiations for India-Canada Comprehensive Economic Partnership Agreement (CEPA). They will also consider an Interim Agreement or Early Progress Trade Agreement (EPTA) that could bring early commercial gains to both the countries.

The decision came during the fifth India-Canada Ministerial Dialogue on Trade & Investment (MDTI) in New Delhi on Feiday.

According to the Ministry of Commerce & Industry, the Interim Agreement would include high level commitments in goods, services, rules of origin, sanitary and phytosanitary measures, technical barriers to trade, and dispute settlement, and may also cover any other areas mutually agreed upon.

"The Ministers highlighted the existing trade complementarities between India and Canada and emphasised that the trade agreement would help in expanding bilateral trade in goods and services through unlocking the potential across sectors," said the ministry.

A range of other bilateral trade and investment issues were discussed during the meeting.

Both countries agreed to undertake intensified work with respect to the recognition of Canada’s systems approach to pest risk management in pulses and market access for Indian agriculture goods such as sweet corn, baby corn and banana etc.

The Ministers acknowledged the significance of establishing resilient supply chains in critical sectors and exchanged views on collaboration in this area.

The Ministry of Commerce & Industry said the two Ministers emphasised enhancing cooperation in sectors such as pharmaceuticals and critical and rare earth minerals as well as in areas like tourism, urban infrastructure, renewable energy and mining.

They also noted the role of strong people-to-people ties between the two countries, including movement of professionals and skilled workers, students, and business travellers, in strengthening the bilateral economic partnership.

The Ministers agreed to work closely to provide sustained momentum to building linkages and strengthen cooperation across sectors to harness full potential of the trade and investment relationship between India and Canada.