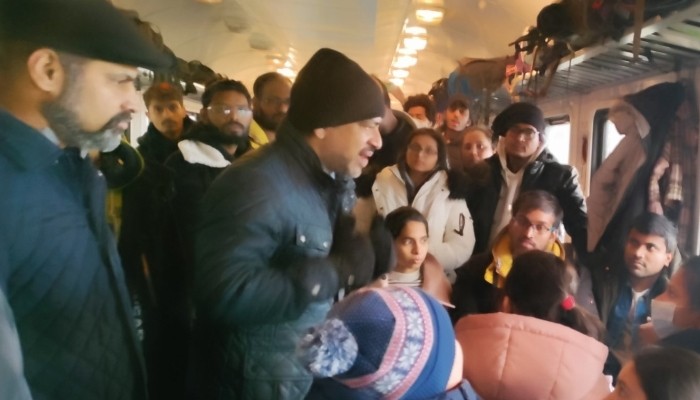 Indian students from Sumy leave for Poland in a train from Ukraine's Lviv on Thursday.

It was the end of a 13-day ordeal for 694 Indian students when they arrived in Delhi Friday morning after having been evacuated from Sumy in war-hit Ukraine.

The Indian embassy had arranged three flights to bring them home. Over 23,000 Indian students and nationals have been evacuated in the last 13 days.

Minister of External Affairs S Jaishankar thanked everyone associated with the evacuation process and Operation Ganga. In a statement issued on Friday morning, he expressed gratitude to the authorities in Ukraine and Russia as well as the Red Cross for the evacuation assistance.

The statement, shared by EAM Jaishankar on Twitter, said:

“Students from Sumy are returning today to India. Their evacuation was particularly challenging.

Operation Ganga, undertaken at the direction of Prime Minister Narendra Modi has delivered due to both leadership and commitment.

We are thankful to all those who facilitated its objectives. Our particular gratitude to the authorities in Ukraine and Russia as well as the Red Cross for the evacuation assistance.

My sincere thanks to them. We are grateful to NGOs, individual volunteers, corporates, our airlines, and the Indian Air Force who worked so tirelessly in this exercise.

Appreciate the contribution of my four ministerial colleagues, Jyotiraditya M Scindia, Kiren Rijiji, Hardeep Singh Puri, and General (Retd) V.K. Singh whose presence on the ground made a big difference.

Applaud our Embassy in Ukraine and Team MEA for their dedicated efforts in a difficult conflict situation".

Earlier this week, PM Narendra Modi had held discussions with Russian President Vladimir Putin and Ukrainian leader Volodymyr Zelenskyy on ways to start the stalled evacuation process of the Indian students from Sumy, which was being pummelled by the Russian forces.