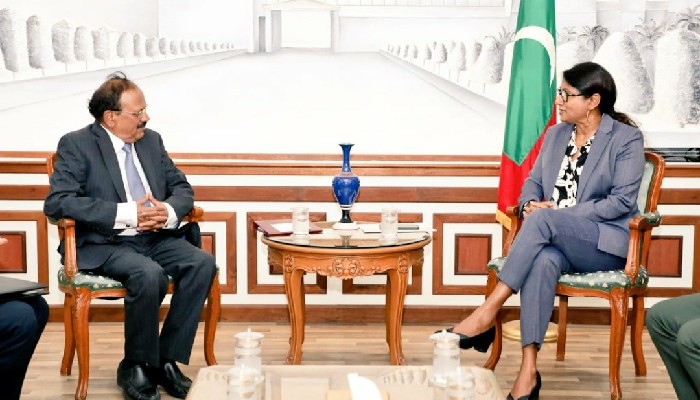 He congratulated Maldives on successfully hosting the Colombo Security Conclave

An earlier tweet by the Maldivian Ministry of Defence had said that Minister Didi met with India’s NSA Ajit Doval.

“The Minister noted the robust India-Maldives Defence and Security Partnership and expressed hope for continued collaboration and dynamism in enforcing Colombo Security Conclave's Charter and 4 Pillars of Cooperation,” the tweet had further said.

NSA Doval attended the 5th National Security Advisor level meeting held on Wednesday and Thursday in Maldives. The meet was attended by Maldivian Minister of Defence Didi, General Kamal Gunaratne (Retd.), Secretary to the Ministry of Defence of the Democratic Socialist Republic of Sri Lanka; and Kumaresan Ilango, National Security Adviser to the Republic of Mauritius.

Delegations from Bangladesh and Seychelles participated as observers, it added.

The Member states agreed upon a roadmap for further cooperation and collaboration on these pillars of cooperation, it added.

According to the Joint Statement, the roadmap will facilitate robust mechanisms for coordinated responses capacity building and strengthening information flow between member states.

The delegation from Bangladesh was led by Tarique Ahmed Siddique, Defence and Security Adviser to the Prime Minister of Bangladesh and Seychelles was represented by Simon Archange Dine, Chief of Staff of Seychelles Defence Forces.

As maritime neighbours, facing similar threats, the Conclave reaffirmed their commitment to engage in consistent joint efforts to achieve regional peace and security, the statement said.