Desire good relationship with Pakistan, but not at the expense of security: Foreign Secretary Shringla 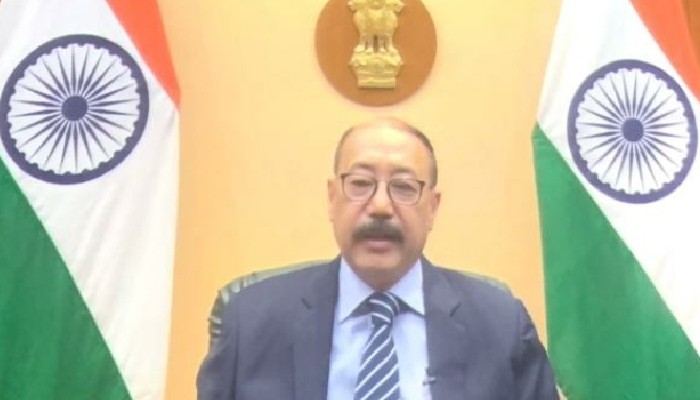 The neighbourhood comes first and foremost amongst all our foreign policy priorities, FS Shringla said.

Peace and tranquillity in the border areas was essential for the development India-China ties, he added

While India desires to have a good relationship with Pakistan, it cannot be at the expense of New Delhi’s security, Foreign Secretary Harsh Vardhan Shringla said on Wednesday.

He also pointed out that India had made it clear to China that peace and tranquillity in the border areas was essential for the development of our relationship.

“Development of India-China relationship has to be based on 'three mutuals' - mutual respect, mutual sensitivity and mutual interest,” he said.

The observations came during Foreign Secretary Shringla's remarks at the Inaugural Session of the Training Module on India’s Neighbourhood, Lal Bahadur Shastri National Academy of Administration.

According to Shringla, globalisation begins with our neighbourhood. “The neighbourhood comes first and foremost amongst all our foreign policy priorities,” he said.

“It is these countries - with the exception of Pakistan - that we work most closely with,” he added.

Noting that countries in neighbourhood are of special significance to India, the Foreign Secretary said, New Delhi’s ties with these countries are underpinned by a shared history and culture.

“Policy initiatives taken by India - and its neighbours – have implications for each other. Ties with the neighbouring countries have a direct relevance to our States bordering these countries,” he said.

According to Foreign Secretary Shringla, India also realizes its prosperity and growth are linked to that of its neighbours.

“We cannot develop unless our neighbours develop,” he revealed.
India’s foreign and security policies in this space operate at several levels and dimensions. We have separate bilateral relationships with each of our neighbours, Shringla said.

“We also interact with them on plurilateral constructs. We work with them within multilateral frameworks,” he mentioned.

Arguing that India maintains excellent political relations with neighbours, Shringla recalled that South Asian leaders were invited when the present government was sworn in for the first time in 2014.

“Leaders of BIMSTEC countries, that include several of our neighbours on the Bay of Bengal littoral, were invited when the government was sworn in for the second time in 2019,” he said.

More than a dozen bilateral visits at the level of Heads of State and Government have been exchanged separately with Bhutan, Nepal and Sri Lanka each since 2014, Shringla said.

“The only country that our President, Prime Minister and External Affairs Minister have all visited since the pandemic struck has been Bangladesh,” he mentioned.

“They did so to cement a very special relationship on the 50th anniversary of the liberation of Bangladesh and the establishment of bilateral diplomatic relations,” the Foreign Secretary said.

“The first foreign visits by the President and Prime Minister of Sri Lanka after they assumed office were to India,” he argued.

“This intensity of political interaction is indicative of good and constructive bilateral relationships,” Shringla reckoned.

“They take place in a context in which many persistent problems have slowly and patiently been dealt with in a mutually acceptable manner,” he said.

Maintaining that physical proximity means that we often share solutions, the Foreign Secretary said it also means, unfortunately, that many of our major foreign policy and security challenges arise from the neighbourhood.

“You are all aware of the major problems such as cross-border terrorism, political volatility and instability, fundamentalist and radical ideologies, illegal movements across borders, narcotics, and arms trafficking,” he pointed out.

“Some of our neighbours remain trapped in interpretations of history that do not allow them to adopt a progressive vision for the region,” he said.