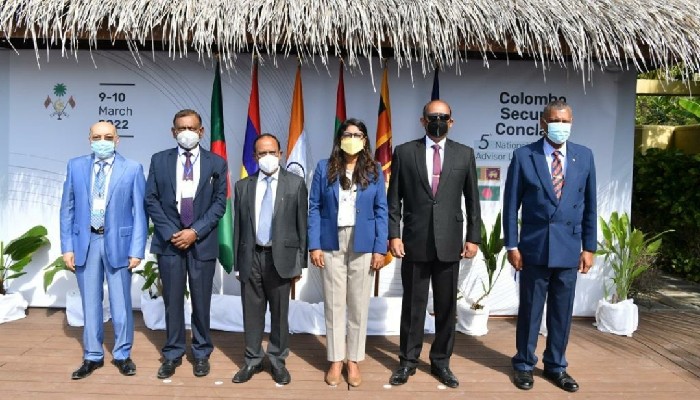 The two-day 5th Colombo Security Conclave is being held in Male, Maldives

India on Wednesday called for strengthening cooperation amongst maritime neighbours to address shared security challenges and as first responders in the region.

National Security Advisor (NSA) Ajit Doval highlighted this point in his statement at the 5th Colombo Security Conclave Meeting which began in Male, Maldives in Wednesday.

“5th Colombo Security Conclave Meeting in Male. NSA Ajit Doval, in his statement, called for strengthening cooperation amongst maritime neighbours to address shared security challenges, and as first responders,” said a tweet of the Indian High Commission in Maldives.

The two-day Conclave, being hosted by Maldives, is being attended by National Security Advisors and Representatives from India, Sri Lanka, Maldives, Mauritius, Bangladesh and Seychelles.

The Colombo Security Conclave was founded as a trilateral security framework between India, Sri Lanka and the Maldives with four pillars of security cooperation, covering marine safety and security, human trafficking, counter-terrorism, and cyber security.

A Maldives Ministry of Defence statement said that Minister of Defence Mariya Didi in her statement reiterated President Ibrahim Mohamed Solih’s commitment to the peace, security and stability of the region and the Government's view of Colombo Security Conclave, despite its infancy, as a meaningful construct to tackle many of the pressing challenges we face.

It may be recalled that earlier this year, India had hosted a virtual workshop on ‘Developing Regional Cyber Security Capabilities on Defensive operations, Deep/Dark Web handling and Digital Forensics’ that was attended by delegates from Sri Lanka, Maldives, India, Seychelles, Bangladesh and Mauritius.