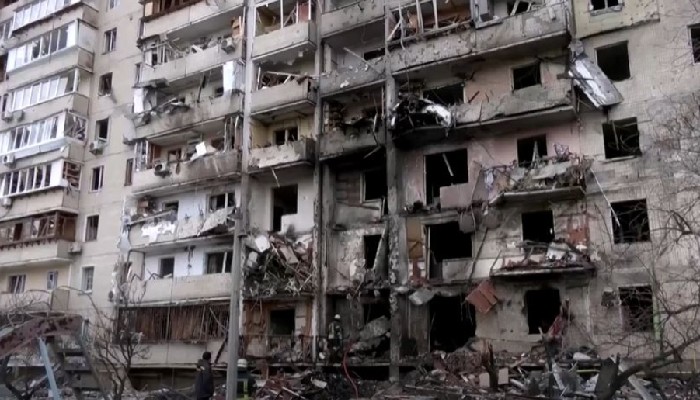 A large number of Indian students are stranded in Sumy, northeast Ukraine

There was some good news for Indian students still stranded in Ukraine as Russia declared a ceasefire on Tuesday and offered to provide "humanitarian corridors".

"In order to conduct a humanitarian operation from 12.30 IST on March 8, 2022, Russia declares cease-fire and is ready to provide humanitarian corridors," the Russian Embassy in India said on Twitter.

The embassy released the list of humanitarian corridors that it is ready to provide. It includes Sumy city in northeast Ukraine, where several hundred Indian students are reported to be stranded.

The others are from Kyiv and adjacent settlements, Chernigov, Kharkiv, and Mariupol.

Russia said it would be providing the humanitarian corridors from Sumy "by two routes to Poltava and to the territory of the Russian Federation to Belgorod - then by air, rail and road transport to selected destinations or temporary accommodation, in the southern direction - in agreement with the Ukrainian side".

Indian nationals, including students, have been evacuated from most other Ukrainian cities, including Kharkiv. Over the past few days, the focus has been on Sumy, which still has a large number of Indian students.

The students have not been able to leave despite repeated repeated requests for a safe corridor from India to both Russia and Ukraine.

Prime Minister Narendra Modi had spoken to the Presidents of both Russia and Ukraine on Monday. He had emphasized the need for an immediate ceasefire and for both parties to return to the path of dialogue and diplomacy.

Acknowledging their efforts in evacuation of Indian nationals from the conflict-ridden region, he had thanked both Russia and Ukraine.

In the phone call with President Putin, PM Modi had stressed the importance of the safe evacuation of Indian citizens from Ukraine's Sumy city at the earliest.

This issue was also raised by India at the UN Security Council meeting on Ukraine. India's Permanent Representative at the UN TS Tirumurti expressed deep concern about the stranded students.

"Despite our repeated urgings to both sides, the safe corridor for our students stranded in Sumy did not materialise," Tirumurti pointed out on Monday.

Indian students have been stranded in Sumy amid ongoing fighting and the lack of transport out of the city.

“We are exploring multiple options for evacuating our citizens, our students out of there. But the main challenge remains the ongoing shelling there, the ongoing violence there, and the lack of transportation,” the MEA Spokesperson had said on Saturday.