All Indian students stranded in Ukraine's Sumy have been moved out: MEA 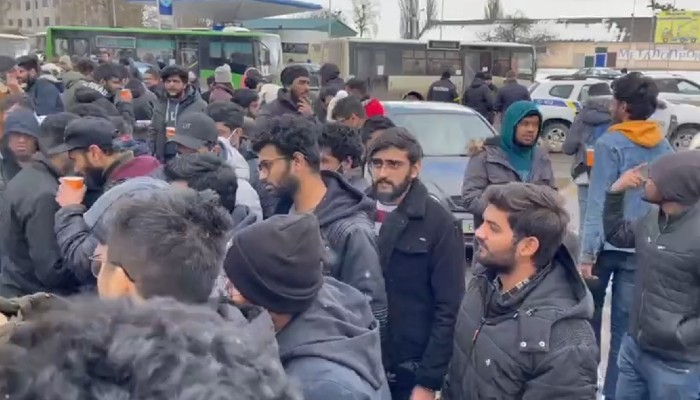 The 694 Indian students were evacuated from Sumy in buses.

Nearly 700 Indian students stranded in the war-hit northeastern Ukrainian city of Sumy were evacuated on Tuesday, hours after Russia announced a ceasefire and offered humanitarian corridors.

All the 694 students were taken to Poltova from where they will travel to western Ukraine by trains. They will be brought back to India in flights under Operation Ganga, said the Ministry of External Affairs (MEA).

"Happy to inform that we have been able to move out all Indian students from Sumy.

They are currently en route to Poltava, from where they will board trains to western Ukraine.

Flights under #OperationGanga are being prepared to bring them home," MEA Official Spokesperson Arindam Bagchi tweeted on Tuesday evening.

Earlier in the day, Union Minister Hardeep Singh Puri had confirmed that the evacuation process for Indian students stranded in the war-torn Ukrainian city of Sumy had started and they were being been taken in buses to Poltava.

"Last night, I checked with the control room, 694 Indian students were remaining in Sumy. Today, they have all left in buses for Poltava," said Puri.

Sumy has been witnessing intense fighting between Russian and Ukrainian troops for days now. India had been making efforts to evacuate its citizens from the northeastern Ukrainian city, but with little success due to the heavy shelling and continuing airstrikes.

According to multiple accounts on social media as well as in news publications, Indian students in Sumy were extremely worried over the past few days.

With no electricity and water supply, ATMs running out of cash, melting snow to slake their thirst and fast running out of supplies, hundreds of Indian students trapped in Sumy stood on roads every morning, hoping that "today would be the day" when they would be rescued from the savagery of the war that has engulfed Ukraine, a report by news agency PTI said.

On Tuesday, Russia declared a ceasefire from 10 AM (Moscow time) to provide humanitarian corridors in the cities of Kyiv, Chernihiv, Sumy, Kharkiv and Mariupol.