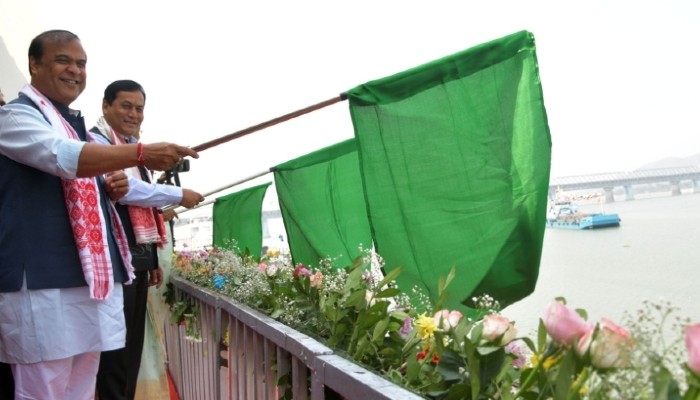 The vessel being flagged in at Guwahati, Assam on Sunday.

The maiden voyage of food-grains from Patna (Bihar) to Pandu (Assam) via Bangladesh was received in Guwahati on Sunday. This ushered in a new age for inland waterways in Assam as the Brahmaputra (National Waterway-2) got connected with Ganga (National Waterway-1) via the Indo-Bangladesh Protocol (IBP) route.

The self-propelled vessel MV Lal Bahadur Shastri carried 200 MT of foodgrains for the Food Corporation of India (FCI) on its maiden, pilot run.

IWAI is planning to run a fixed schedule sailing between NW-1 and NW-2 heralding a new age of inland water transport for Assam & Northeast India.

Another vessel, MV Ram Prasad Bismil with two barges Kalpana Chawla and APJ Abdul Kalam, started its voyage from Haldia on February 17. It is also on its way to Pandu. The vessel is carrying 1800MT steel and has already reached the Bangladesh border at Dhubri.

The ODC (Over Dimensional Cargo, 252 MT) of Numaligarh Bio-refinery reached Silghat on February 15 from Haldia through IWT via IBP route. Another ODC (250MT) consignment is also on the way to Silghat.

The Assam Chief Minister said, “The start of cargo movement through ships through Indo Bangladesh Protocol Route (IBRP) marks the beginning of a new age of economic prosperity for the whole region of Northeast. This will pave the way for growth & development of inland water transport".

Union Minister Sonowal said, “Today marks the beginning of a new age of inland water transport in Assam. This is going to provide the business community a viable, economic & ecological alternative. The seamless cargo transportation is a journey of unfulfilled desires & aspirations of the people of Assam. We are confident that the cargo movement via waterways is going to play a pivotal role in energising India’s northeast as the engine of growth."

According to the Ministry of Ports, Shipping & Waterways, the sustained effort to rejuvenate the historical trade routes via Bangladesh got a fillip under PM Gati Shakti and is expected to ramp up swift movement of cargo over the Brahmaputra.

The Protocol on Inland Water Transit and Trade (PIWTT) between India & Bangladesh will be optimally beneficial when the value from the cargo trade in the region is optimally unlocked.

To improve the navigability, two stretches of IBP routes, i.e., Sirajganj-Daikhowa and Ashuganj-Zakiganj are also being developed at a cost of Rs. 305.84 crore on an 80:20 share basis (80% being borne by India and 20% by Bangladesh). The development of these stretches is expected to provide seamless navigation to NER via the IBP route, the ministry said.

The contracts for dredging on the two stretches for providing and maintaining requisite depth for a period of seven years (from 2019 to 2026) are underway which will reduce time and cost of transport and travel.

In line with India’s Act East policy, the Ministry of Ports, Shipping & Waterways (MoPSW), has taken up several infrastructure projects on National Waterways-1, Indo-Bangladesh Protocol route, and NW-2, through the Inland Waterways Authority of India (IWAI). These steps will improve the connectivity with the North Eastern Region (NER) through waterways.

The government has undertaken the ambitious Jal Marg Vikas Project (JMVP) with an investment of about Rs. 4600 crores for the capacity augmentation of NW-1 (river Ganga) for safe and sustainable movement of vessels upto 2000 tonnes.

This will usher a new era of growth for all the states of Northeast India. The waterways will cut through the landlocked access which has been crippling development in the region for long. The waterways not only remove this geographical hindrance on the road of progress in the region but also provides an economical, swift and convenient transportation for the businesses and people of the region, the ministry pointed out.