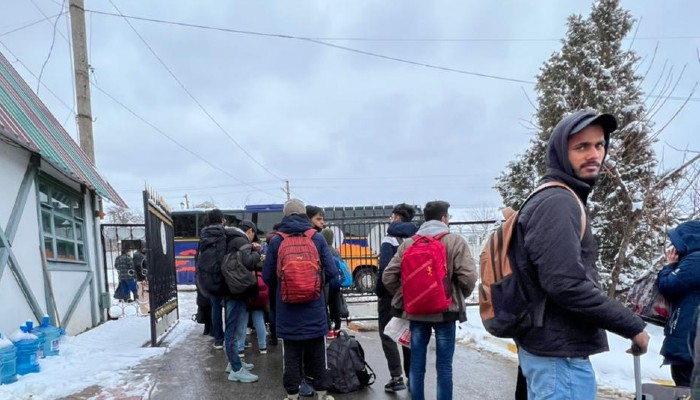 So far 13,300 students have returned to India on 63 flights under 'Operation Ganga'

Since the first advisory was issued, more than 21,000 Indian students have moved out of Ukraine

The Indian embassy in Hungary on Sunday began its last leg of Operation Ganga and asked students stranded in the war-ravaged East European country to reach the Hungaria City Centre in Budapest, the Hungarian capital between 10 am and noon.

“Important Announcement: Embassy of India begins its last leg of Operation Ganga flights today. All those students staying in their OWN accommodation ( other than arranged by Embassy) are requested to reach @Hungariacitycentre , Rakoczi Ut 90, Budapest between 10 am-12 pm,” the Indian embassy in Hungary tweeted.

Earlier, the Indian embassy in Ukraine had requested its nationals who are still stranded in conflict-stricken Ukraine to fill up a form mentioning basic details. The embassy's official Twitter account posted a Google form asking for basic details like name, passport number and current location.

“All Indian nationals who still remain in Ukraine are requested to fill up the details contained in the attached Google Form on an URGENT BASIS. Be Safe, Be Strong,” the Indian embassy in Ukraine tweeted.

On Saturday, Ministry of External Affairs Spokesperson Arindam Bagchi during a special briefing said that in the last 24 hours, 2900 Indians on board 15 flights have landed in India. With this, as per the Ministry, approximately 13,300 people have returned to India on 63 flights under Operation Ganga.

The MEA Spokesperson further said that as many as 13 flights have been scheduled in the next 24 hours, and of these flights, one will be carried out by the IAF C-17 from Budapest.

He also said that 298 Indians are still there in war-torn Ukraine to be evacuated.

However, since the first advisory was issued by the Indian embassy in Ukraine, more than 21,000 Indian students have moved out of the East European country.

In terms of humanitarian assistance to Ukraine, the MEA Spokesperson said that six tranches of assistance, containing medicines, blankets, tarpaulin and relief supplies have been sent to the war-hit country.