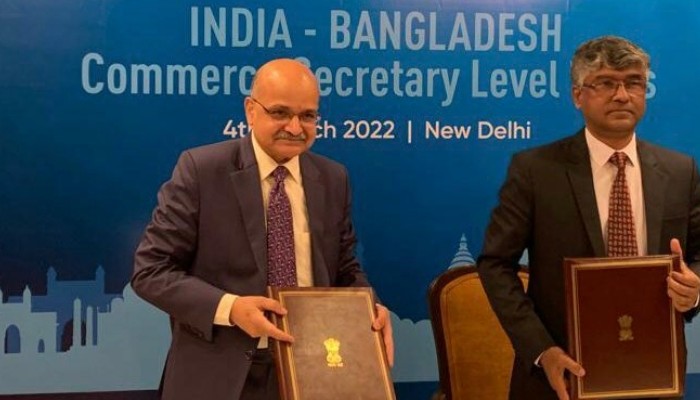 India and Bangladesh have agreed on the need to finalize a Joint Study on a Comprehensive Economic Partnership Agreement (CEPA) soon.

The two sides have also stressed on strengthening regional connectivity between the two countries through multi-modal transport.

These were among the issues discussed at the India-Bangladesh Commerce Secretary-level talks held in New Delhi on Friday.

According to the Ministry of Commerce & Industry, both sides also held extensive discussions on other issues like the development of railway infrastructure, port infrastructure, border Haats, harmonization of standards and mutual recognition agreement.

They also discussed the growth in bilateral trade between the two countries in recent years.

A special mention was made of Bangladesh being the 6th largest trade partner of India during the meet.

The delegation emphasized on the development of railway infrastructure and other logistic facilities which led to progress in commerce between the two countries.

Progress on the following agenda items was appreciated by the delegation of both the countries:

* For facilitation of trade between India-Bangladesh through railways -

c) For allowing import of all commodities from India by rail via Darsana, the construction of loading and unloading platform completed at Darshana.

d) For development of Rail and Road based ICD at Ishwardi, the DPP approved.

* Consensus over the use of returning empty railway wagons/containers by Bangladesh - this would reduce overall logistics cost of India's exports to Bangladesh.

The meeting was preceded by the 14th meeting of the Joint Working Group (JWG) on Trade, at the level of Joint/Additional Secretaries of India and Bangladesh during which comprehensive discussions were held on areas of mutual interest, the ministry said.

It was agreed that the next meetings of the JWG and Commerce Secretaries will be held in Bangladesh, at mutually convenient dates.