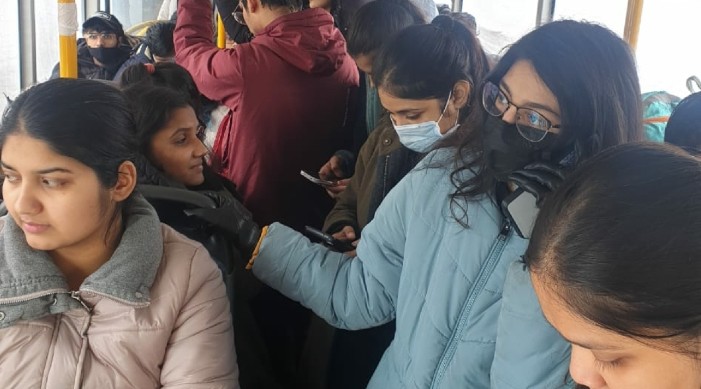 India has sent buses to evacuate students from Pisochyn

Most Indian nationals have reached countries neighbouring Ukraine to the west

As India continued efforts to evacuate students from eastern Ukraine, three buses organised by the government reached Pisochyn in the Kharkiv region on Saturday evening.

These buses will be making their way westwards with the Indian students.

Two more buses were due to arrive soon, the Indian Embassy in Ukraine said in a tweet announcing the development.

Buses were enroute to Pisochyn in Ukraine's Kharkiv to evacuate 298 Indian students stranded there, the Indian Embassy in Ukraine had said earlier on Saturday.

In a tweet, the Indian Embassy in Ukraine said, "Reaching out to our 298 students in Pisochyn. Buses are enroute and expected to arrive soon. Please follow all safety instructions and precautions."

India has been evacuating its citizens, including students, who were stranded in Ukraine after the invasion by Russia. Kharkiv has faced a fierce onslaught by the Russian military over the past few days.

While a large number of Indian nationals have reached Ukraine's neighbouring countries safely and are being evacuated from there by the Indian government, some students are still stuck in Kharkiv-Pisochyn and Sumy.

Earlier on Saturday, the Indian Embassy said that despite "major adversities", it managed to deliver food and water to Indian students in Pisochyn.

Meanwhile, in another tweet, the embassy said that all possible mechanisms were in place to evacuate Indian citizens in Sumy safely and securely. The Indian Embassy in Ukraine was deeply engaged in ensuring the safe evacuation of Indian citizens from the city conflict-ridden Kharkiv,. it said.

On Friday, India had sought a ceasefire by Russian and Ukrainian troops for evacuation of its citizens from the conflict zones of Kharkiv and Sumy in eastern Ukraine.

The MEA said that about 300 Indians were stranded in Kharkiv and 700 in Sumy as on Friday evening.