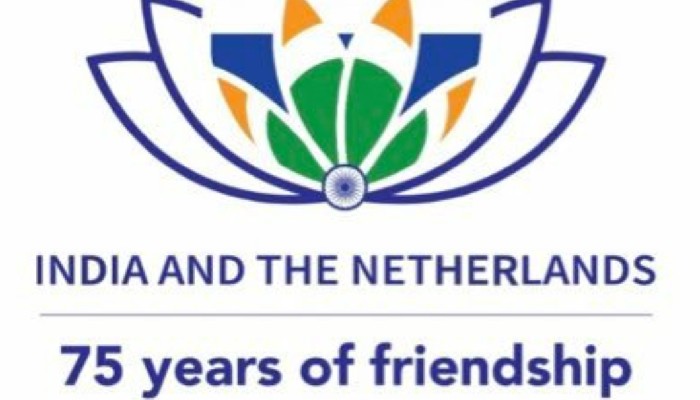 The logo features a lotus and a tulip – the national flowers of both countries.

The Netherlands presented 3000 fresh tulips to India, as a symbol of friendship

A special logo has been unveiled to commemorate 75 years of diplomatic relations between India and the Netherlands.

The Netherlands was among the first European countries to have bilateral relations with India, the Ministry of External Affairs (MEA) said, while announcing the logo, on Wednesday.

Ambassador of the Kingdom of the Netherlands in India Marten van den Berg along with Secretary (West), Ministry of External Affairs (MEA), Government of India Sanjay Verma released the logo on Wednesday to mark the 75th anniversary of diplomatic relations between the two nations.

The logo features a lotus and a tulip – the national flowers of both countries. The chakra in the middle of the logo depicts the bond of the friendship between the countries and the flag colours enhance the connections that exist between the people of India and the people of the Netherlands.

The unveiling took place during the MEA’s “Azadi ka Amrit Mahotsav” year and marks the beginning of a series of events and activities planned during the year in a wide range of areas of cooperation including water, agriculture, innovation, energy, climate, and culture.

To celebrate Azadi Ka Amrit Mahotsav, the Netherlands presented 3000 fresh tulips to India, as a symbol of friendship, which were planted in the Jawaharlal Nehru Bhawan gardens.