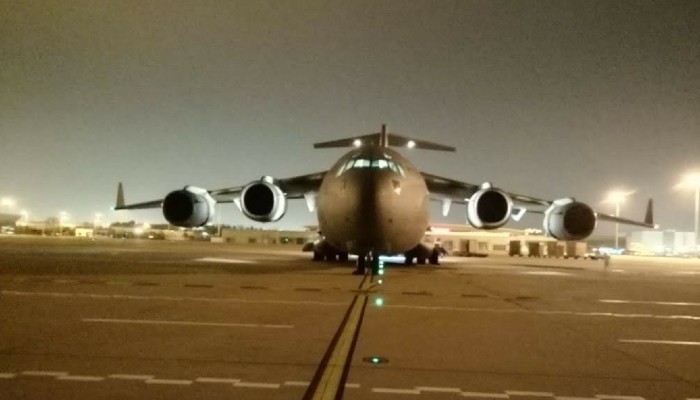 Over the next three days, 26 flights have been scheduled to bring back Indian citizens

The aircraft will bring back Indian nationals who have crossed over the land borders from Ukraine.

Two more C-17 aircraft were deployed for the evacuation process later in the day, taking the total to three.

India had launched Operation Ganga to assist in the evacuation of Indian nationals from Ukraine after the Russian invasion began last Thursday.

The move to send IAF aircraft comes amid reports of fierce fighting between Russian and Ukrainian troops, including close to the capital, Kyiv.

"The IAF joined #OperationGanga today morning when it dispatched a heavy lift C-17 transport aircraft to Romania to bring back our citizens," said a tweet by Spokesperson Ministry of Defence on Wednesday.

Foreign Secretary Harsh Vardhan Shringla had on Tuesday said that over the next three days, 26 flights have been scheduled to bring out Indian citizens. Apart from Bucharest (Romania) and Budapest (Hungary), airports in Poland and the Slovak Republic will also be used.

“We will mount as many flights as required,” he had noted at the Special Briefing on Operation Ganga.

Shringla had said that a C17 Indian Air Force aircraft is also expected to fly out tomorrow morning at 4 am and reach Romania where it would also bring back, repatriate our citizens who are there.

“We will be also in the course of the next few days, mounting more Indian Air Force flights to bring back our citizens,” he had informed.

The Foreign Secretary had also stated that 12,000 Indians have been brought out of Ukraine so far.

Meanwhile, IAF Vice-Chief Air Marshal Sandeep Singh on Wednesday told mediapersons that three C-17 transport aircraft have been sent as of now by the Air Force.

"Relief materials are also being sent. The operation is under way in coordination with the MEA," he was quoted in the media.

"These are continuous round the clock operations to Romania, Poland, and Hungary," the IAF officer had said.