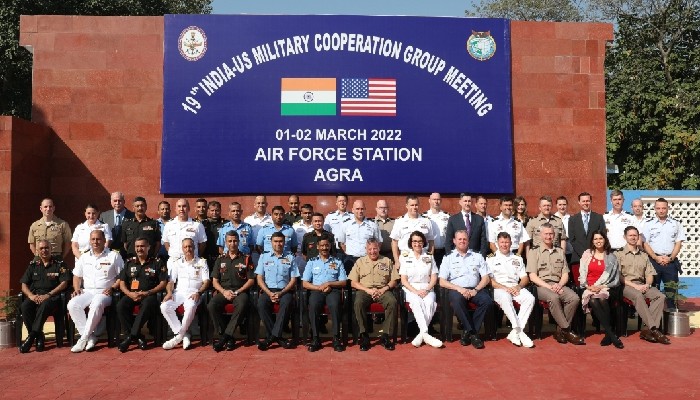 India and the US are exploring new initiatives under the existing defence cooperation mechanism. The issue was discussed at the 19th edition of the India-US Military Cooperation Group meeting held in Agra, Uttar Pradesh on Tuesday and Wednesday.

According to the Ministry of Defence, the discussions laid emphasis on strengthening the ongoing defence engagements between the two nations and deliberated on new initiatives under the ambit of the existing cooperation mechanism.

The meeting was co-chaired by Chief of Integrated Defence Staff to the Chairman Chiefs of Staff Committee (CISC) Air Marshal BR Krishna from the Indian side and Deputy Commander, US Indo-Pacific Command Lieutenant General Stephen D Sklenka from the US side.

The India-US Military Cooperation Group is a forum established to progress defence cooperation between the countries through regular talks at the strategic and operational levels between Headquarters, Integrated Defence Staff, and the US Indo-Pacific Command.

The meeting comes in the backdrop of Admiral Samuel J Paparo, Commander of the US Navy’s Pacific Fleet, visiting India from February 25-28. During the visit, Admiral Paparo interacted with India’s Chief of the Naval Staff Admiral R Hari Kumar, in addition to other high ranking government officials.

His visit had coincided with the biennial multilateral exercise Milan 2020 underway in the port city of Visakhapatnam where he was also a speaker at the international maritime seminar held on Sunday as part of the exercise.

Among issues discussed were avenues to strengthen the growing cooperation between the two navies, deal with “challenges emerging on the maritime front, and enhance collaboration and interoperability to ensure maritime security in the Indian Ocean Region (IOR).”

According to the defence ministry, India and the USA have traditionally maintained close and friendly relations. The defence relationship between the two countries has been one of mutual trust and confidence, which has transformed after the accord of major ‘Defence Partner Status’ to India in June 2016.

Admiral Paparo’s visit marked an important milestone in the continued and regular dialogue between India and the US to strengthen their comprehensive global strategic partnership further.