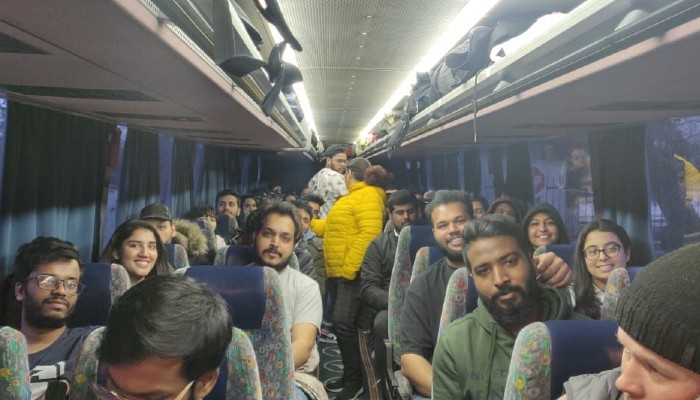 Flights under ‘Operation Ganga’ to assist evacuations have been increased

Putting things straight on the on-going evacuation mission, India on Wednesday said around 17,000 students have left Ukraine’s borders since the first advisory was issued by the Indian Embassy in Kyiv.

“We now estimate nearly 17,000 Indian nationals have left Ukraine’s borders since our advisories were issued. This of course includes some Indians who had not registered with the embassy earlier,” MEA Spokesperson Arindam Bagchi said during a special briefing.

“15 flights are scheduled over the next 24 hours. Some of these are already onroute,” he said.

Noting that the Indian Air Force aircrafts have joined Operation Ganga, the MEA Spokesperson said the first C-17 flight from Bucharest is expected to land in New Delhi later tonight.

“Three more IAF flights will be undertaken today from Budapest, Bucharest and Rhessesu in Poland,” he noted.

“The cities in Eastern Ukraine remain as areas of concern for us due to the continuing violence,” Bagchi observed.

“There are encouraging reports that some students were able to board trains out of Kharkiv, yesterday night and today morning,” he mentioned.

“MEA assisted the students through student contractors and other partners,” the MEA Spokesperson added.

“As you know we have been in communication with the Russian side regarding safe passage of our nationals from Kharkhiv and other nearby cities,” he stated.

“The advisory that has just been issued by the Indian Embassy in Ukraine on the need of our nationals to leave Kharkhiv immediately is on the basis of information received from Russia,” Bagchi said.

The Indian Embassy in Ukraine on Wednesday had issued an urgent advisory asking all Indian nationals to leave Kharkiv immediately in light of the deteriorating situation.

The Embassy of India in Ukraine tweeted an urgent advisory to all Indian nationals in Kharkiv asking them to immediately leave the city for their own safety and security in the light of the deteriorating situation.

They should proceed to Pesochin, Babaye and Bezlyudovka as soon as possible for their safety, the advisory said.

“Under all circumstances they must reach these settlements by 1800 hrs (Ukrainian time) today,” it further stated.