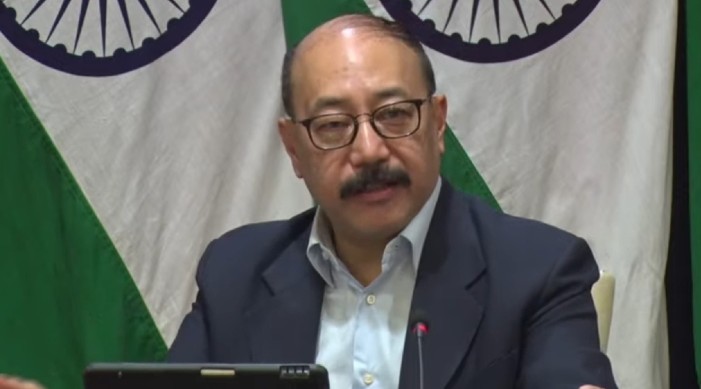 Foreign Secretary Harsh Vardhan Shringla speaks at a special briefing for the media on Tuesday.

Evacuation of Indian students from Kharkiv and adjoining conflict areas was now India’s top priority, Foreign Secretary Shringla said on Tuesday evening, hours after a medical student from Karnataka died after being hit during shelling in the Ukrainian city.

Maintaining that India remained very concerned about the situation in Kharkiv, Sumy and adjacent areas which are currently in a conflict zone, he said he had called in Ambassadors of Russia and Ukraine earlier in the day.

“I reiterated our demand for urgent safe passage for Indian nationals who are still in Kharkiv and other cities in the conflict area,” he said.

India has already sent a team of officers from Moscow to the Russian border area adjoining Ukraine.

“This team is currently in a city called Belgorad, which is not far from Kharkiv. They are looking at routes out of the Kharkiv-Sumy area, the accommodation needed and transportation options,” the Foreign Secretary said.

He noted that some Indians had been able to leave Kharkiv and about 100 people had taken a train to the west. Others also tried but they could not as the circumstances prevented it, FS Shringla said. They went back as there were risks associated, he added.

Referring to the ongoing evacuation process for Indian nationals under Operation Ganga, he said that nearly 26 flights were planned from countries neighbouring Ukraine over the next few days to bring them back.

Pointing out that there were an estimated 20,000 Indian nationals in Ukraine at the time the first advisory had been issued, he said 12,000 or nearly 60% of them had since left the country. Of the remaining 40%, roughly half remain in the conflict zone in the Kharkiv-Sumy area.

“The other half have either reached the western borders of Ukraine or are heading there,” the Foreign Secretary added.

Referring to the advisories issued by the Indian Embassy over the last two days asking Indian nationals to leave Kyiv, he said all of them had now left the Ukrainian capital.

According to Shringla, about 7,700 Indian nationals have already crossed over to countries bordering Ukraine in the west and 2,000 have already been flown back to India. The rest of them were waiting for special flights to bring them back, Shringla said.

In response to a query, he asserted that there was no technical problem in Indian students crossing over these land borders and referred to the massive crowds at these places.

“Nearly 500,000 people have gathered at Ukraine’s land borders in the west, mostly Ukrainians but also including Indian nationals and those from other countries,” he said, adding that Ukrainian Border Patrol had their own concerns due to the situation in the country.

“The issue is mainly logistical, there are huge queues of people and lines of vehicles at the immigration border points of people trying to leave the conflict zone. Being a conflict zone there is confusion also. There is no clear-cut control,” he said in response to another question on the issue. Describing the situation as “difficult”, he said, “we are doing our best possible”.

He noted that the Indian Embassy in Ukraine had set up an office in Lviv to assist Indian nationals within western Ukraine wanting to cross over, adding that Indian Ambassadors were waiting on the other side of the border to speed up the process.

Prime Minister Narendra Modi had spoken to the Presidents of Slovakia, Romania, and Poland and the issue was “being taken up at the highest levels”, Foreign Secretary Shringla added.