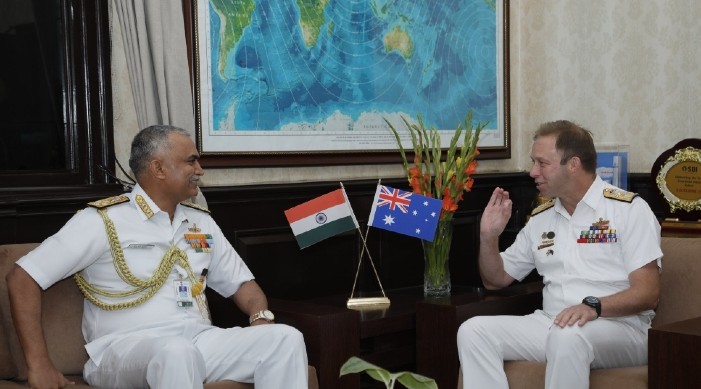 The two naval chiefs discussed challenges on the maritime front

The Navy chiefs of Australia and India on Sunday discussed bilateral defense cooperation and maritime security in the Indian Ocean region.

According to the Ministry of Defence,
major issues discussed during the interaction included avenues to strengthen the growing cooperation between the two nations and navies and deal with challenges emerging on the maritime front.

They also talked about enhancing collaboration and interoperability to ensure maritime security in the Indian Ocean Region (IOR).

During the visit, Admiral Noonan was provided a broad overview of regional security dynamics and the operational aspects in recent times, particularly those related to delivering Humanitarian Assistance and Disaster Relief (HADR) to Friendly Foreign Countries, conducting counter piracy operations, enhancing maritime safety and security in the region, and strengthening foreign cooperation, with special emphasis on IN – RAN cooperation, added the defence ministry.

On February 25, Foreign Secretary Harsh Vardhan Shringla had welcomed the Vice-Admiral to India and discussed maritime cooperation in the Indo-Pacific region and bilateral defence ties.

The Australian Navy Chief's visit serves as an important milestone in the continued and regular dialogue between Indian Navy and the Royal Australian Navy to garner and strengthen their comprehensive global strategic partnership further, the Ministry of Defence noted.

The respective Principals had signed ‘Joint Guidance for Australia – India Navy to Navy Relationship’ in August last year. Terms of Reference for the Conduct of Navy to Navy Talks between the two Navies were signed a month later, the ministry added.