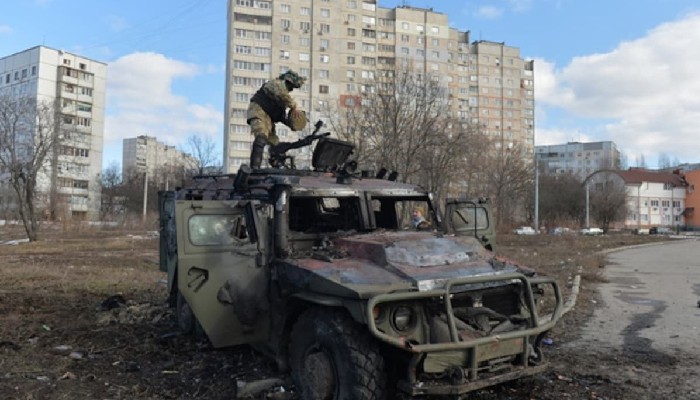 As per the UN, around 102 civilians, including 7 children have been killed in Russia's war on Ukraine

In a major decision on the evacuation of Indians stuck in Ukraine where Russia-led attack has entered the 5th day on Monday, the Indian government has decided to send four Union Ministers as special envoys of Prime Minister Narendra Modi to four neighbouring countries of Ukraine, the Ministry of External Affairs said.

Conducting a special briefing on the on-going evacuation under ‘Operation Ganga,’ MEA Spokesperson Arindam Bagchi said the four Union Ministers to visit the 5 countries are Jyotiraditya Scindia who will be travelling to Romania and Moldova, Kiren Rijiju to Slovak Republic, Hardeep Singh Puri to Hungary and General VK Singh to Poland.

According to the MEA Spokesperson, the special envoys will be travelling to these countries to coordinate and oversee the evacuation process there on the ground, situation permitting they might also go as close as possible to where the evacuation is happening.

He informed that so far six evacuation flights have landed in India and brought back 1,396 Indian nationals. Of the six, four flights were from Bucharest and two were from Budapest.

“The situation on the ground in terms of evacuation remains to be complex and fluid. You have seen that from the media reports that are coming in, some of them quite concerning,” he stated.

“Nevertheless, we have been able to accelerate our evacuation process clearly over the last 24 hours,” the MEA Spokesperson added.

He informed that over 8,000 Indian nationals have left Ukraine since the MEA issued the initial advisories.

“Three more flights are scheduled in the next 24 hours to bring back more Indians,” the MEA spokesperson added.

“Flights are not the constraint, the main focus is to ensure Indians cross the border and reach a safe place,” he further added.

He told media-persons that the Indian embassies in Kyiv, Bucharest, Budapest and Warsaw are managing buses to facilitate the evacuation.

He said that it is better for Indian students stranded in Ukraine to stay in nearby cities and take shelter there, adding that they must move towards the border only after consultation with the respective embassy.

In view of the intensification of Russia’s war on Ukraine, India has advised the stranded Indian nationals in Ukraine to go to West Ukraine, while avoiding reaching the border directly as there is a rush of people there at the moment.

In the meanwhile, India has decided to send humanitarian aid, including medicines to Ukraine. This is being done on Ukraine’s request. The quantity of humanitarian relief and medical supplies is being worked out.