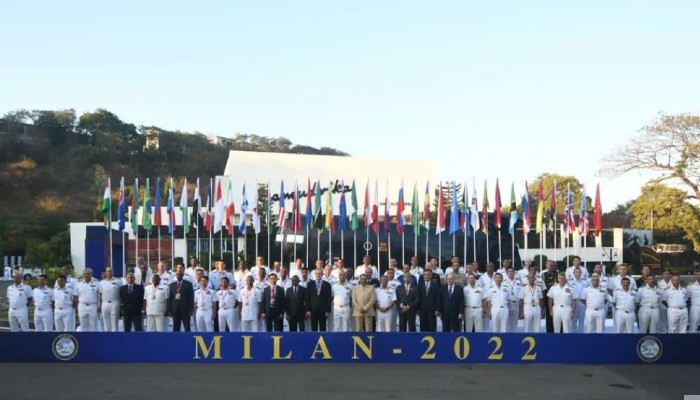 Minister of State for Defence Ajay Bhatt was the chief guest at the opening ceremony.

The biennial Multilateral Naval Exercise Milan 22 kicked off with the Opening Ceremony in Visakhapatnam on Saturday.

The eleventh edition of Milan being hosted by the Eastern Naval Command is the biggest so far in terms of participation from other countries.

"This large congregation gives significance and potency to the word ‘MILAN’ which means “meeting” or “confluence” in Hindi," the Ministry of Defence said on Sunday.

This edition of Milan is larger and more complex than all previous ones, the ministry said, adding that this reflected "India’s growing stature as a responsible and reliable partner in the maritime domain, underscoring the Indian Navy’s commitment to maritime security across the global commons".

The Chief Guest for the opening ceremony was Minister of State for Defence Ajay Bhatt. The event was attended by the Chief of the Naval Staff Admiral R Hari Kumar, as well as Ambassadors, High Commissioners, Chiefs of Navies, Delegation Heads of participating countries and the Commanding Officers and crew of all participating ships.

A Special Day Cover and a movie on the Milan exercise was released by the Chief Guest to mark the occasion.

The Ministry of Defence had earlier said that the aim is to hone operational skills, and enable doctrinal learning in the maritime domain, through professional interaction between friendly navies.

Milan 22 is being conducted over a duration of nine days in two phases with the harbour phase scheduled from February 25 to 28 and Sea Phase from March 1 to 4.

The theme of the Milan 2022 exercise is “Camaraderie-Cohesion-Collaboration” which aims to project India as a responsible maritime power to the world at large.

As a part of the harbour phase, a Milan village has been set up at the Tarang Naval Institute.

According to the defence ministry, the village would provide a glimpse of Indian culture to the visitors, showcasing Indian handicrafts, cuisine and arts, especially from the state of Andhra Pradesh. The village will also provide a venue for social interaction and cultural exchange between the participating navies, the ministry added.

Starting with the participation of four countries, namely, Indonesia, Singapore, Sri Lanka and Thailand, in 1995, Exercise Milan has since grown in terms of number of participants and complexity of exercises.

This edition of Milan is being hosted by the Eastern Naval Command at Vishakhapatnam for the first time. All previous editions have been held at Port Blair under the aegis of the Tri-Service Andaman and Nicobar Command.