2000 Indians evacuated out of Ukraine under Operation Ganga so far: Foreign Secretary Shringla 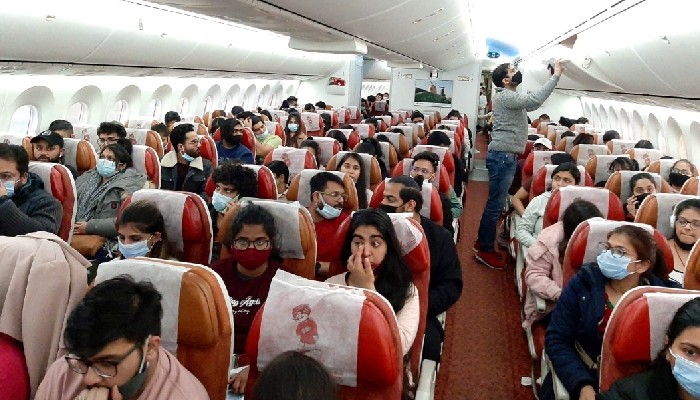 198 Indians returning to Delhi from Bucharest, Romania in the fourth flight of Operation Ganga on Sunday.

2000 Indian nationals have been evacuated from war-torn Ukraine together through the land route and flown out from Romania and Hungary under Operation Ganga, Foreign Secretary Harsh Vardhan Shringla said on Sunday.

Addressing a Special Briefing on Operation Ganga, Foreign Secretary Harsh Vardhan Shringla said, “So far under Operation Ganga, 1000 citizens flown out of Romania and Hungary and another 1000 have been evacuated from Ukraine through the land route.”

In other words, 1000 have crossed over from Ukraine into zones that are conducive for their evacuation by air back to India. Flights for these evacuees were being organised, he added.

Noting that the border crossings to Hungary and Romania were functioning, he said, however, that the exit point to Poland has been generally clogged due to lakhs of Ukrainian and foreign nationals trying to leave the country from that point.

Referring to the advisory issued by the Indian Embassy in Ukraine on Sunday, Foreign Secretary Shringla said that Indian nationals are advised to use nearby railway stations for movement out of regions of active conflict and proceed towards the Western regions.

“We have also given out an advisory saying that it might be best for Indian students to come as close to the border as possible. There are various staging points where they should actually take shelter. Then follow the advice that we give them very carefully as to where they can crossover,” he mentioned.

Stating that one of the points that has been identified is Uzherod, a point that is well connected by rail, Shringla added they were suggesting this because it gives an alternative to the border point in Poland.

Noting that many of Indian citizens have been stuck for long periods of time in the crossing over into Poland as there are probably lakhs of people trying to cross over, he said, it is not an organised situation.

“Many of our people have been there for a long time. We are working round the clock to see what we can provide,” the Indian Foreign Secretary said.

Advising citizens to move westwards, he said that there are also trains from Kyiv he said. There were other options like road and rail to move towards the west, he added.

“Take the most appropriate border staging points as areas that you can move out from leave the countries in accordance with the advisories that we have issued,” Shringla said.

“We have groups of our citizens crossing the border. All along these four countries we have Embassy teams, to assist them at the border crossings. As we speak, we are sending more people to these Embassies to facilitate that problem,” he said.

According to the Foreign Secretary, there is a modification to the earlier notification where the MEA had shared the cell numbers of the mobile teams that are in operations along the border areas.

“We have found out that it was not feasible for our teams to both function as well as to take calls. So we have established hotlines in each of the four countries that are involved and will be the interface of our teams that are actually there at the border crossings to facilitate the process,” he stated.

“The MEA will also take out a 24*7 hotline which will also be open in terms of social media. We will also provide inputs, advisories and options as often as possible so please look out for that,” he said.