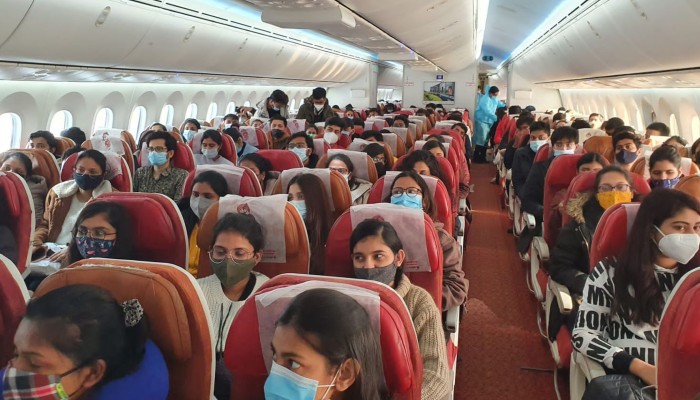 Indian nationals being evacuated from war-torn Ukraine via Romania, Hungary and other places

Evacuation is taking place from around countries which border Ukraine

The first Air India flight carrying 219 Indian nationals on Saturday landed in Mumbai after taking off from Romania on Friday.

External Affairs Minister S Jaishankar has, meanwhile, tweeted that he is personally monitoring the evacuation of citizens stuck in war-torn Ukraine.

“Regarding evacuation of Indian nationals from Ukraine, we are making progress. Our teams are working on the ground round the clock. I am personally monitoring,” EAM Jaishankar tweeted.

Evacuation is taking place from around countries which are bordering Ukraine, where the war has entered the 3rd day.

On Saturday, a batch of Indian students entered Hungary from Ukrainian side at Zahony crossing. They will be evacuated from Budapest.

As situation is worsening in Ukraine with Russia escalating its attack on the East European country, the Indian embassy in Ukraine has issued a fresh advisory, asking all citizens to avoid moving towards border posts without prior coordination with Government of India officials at the border posts.

“The situation at various border checkpoints is sensitive and the embassy is working continuously with our embassies in our neighbouring countries for coordinated evacuation of our citizens. Embassy is finding it increasingly difficult to help the crossing of those Indian nationals who reach border checkpoints without prior intimation,” the Indian embassy said in its advisory issued on Saturday.

“Please note, staying in western cities of Ukraine with access of water, food, accommodation and basic amenities is relatively safer and advisable compared to reaching border check points without being fully abreast of the situation,” the embassy noted.

“All those currently in the Eastern sector are requested to continue to remain in their current places of residence until further instructions, maintain calm, and stay indoors or in shelters as much as possible, with whatever food, water and amenities available and remain patient. Avoid unnecessary movement,” the embassy added.