India at UNSC on Russia’s attack on Ukraine: ‘No solution can ever be arrived at the cost of human lives’ 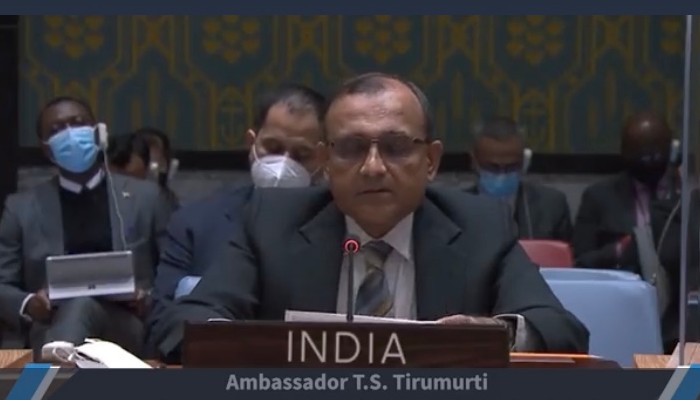 India has called for immediate cessation of hostilities and violence

While demanding immediate, complete and unconditional withdrawal of Russian troops from Ukraine, India on Friday abstained from voting on a US-sponsored UNSC resolution that condemned Moscow aggression against Kyiv.

In the 15-member UNSC, the resolution received 11 votes in favour, one vote against (Russia), with three abstentions (India, UAE and China)

As expectedly, Russia used its veto power to block the resolution, but western nations said the resolution seeks to show Moscow’s isolation on the global stage for its invasion and actions against Ukraine.

India’s Permanent Representative at the UN T S Tirumurti, explaining the country’s position, said, “India is deeply disturbed by the recent turn of development in Ukraine.”

“We urge that all efforts are made for the immediate cessation of violence and hostilities,” he said, adding this was conveyed by Prime Minister Narendra Modi to Russian President Vladimir Putin during a telephonic conversation on Thursday as well.

Making an impassioned plea, India’s Permanent Representative said, “No solution can ever be arrived at the cost of human lives.”

“The contemporary global order has been built on the UN Charter, international law, and respect for the sovereignty and territorial integrity of states. All member states need to honour these principles in finding a constructive way forward,” T S Tirumurti said.

He regretted that the path of diplomacy was given up, we “must return to it.” India’s UNPR further said that dialogue is the only answer to settle differences and disputes.

As per sources, India maintained its consistent, steadfast and balanced position on the matter. They also said that India has been in touch with all sides urging parties concerned to return to the negotiating table.

By abstaining, India retained the option of reaching out to relevant sides in an effort to bridge the gap and find the middle ground with an aim to foster dialogue and diplomacy, sources said.

An earlier draft of the resolution had proposed moving the resolution under Chapter VII of the UN Charter, which provides the framework within which the Security Council may take enforcement action. However, this was dropped in the final version that was put to vote, sources added.