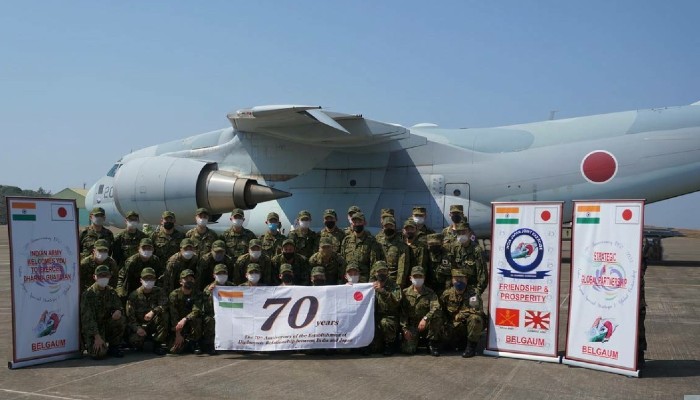 The contingent of Japan Ground Self-Defense Forces after arriving in India.

A contingent of Japan Ground Self-Defense Forces arrived in India on Friday to participate in a 12-day long exercise, Exercise Dharma Guardian-2022. The exercise is an annual training event which is being conducted in India since 2018.

This year is significant as 2022 is the 70th anniversary of the establishment of diplomatic relations between India and Japan.

Notably, in the series of military training exercises undertaken by India with various countries, Exercise Dharma Guardian with Japan is crucial and significant in terms of security challenges faced by both nations in the backdrop of the current global situation, the Ministry of Defence said in a statement.

Japan is a member of the Quad grouping, along with India, the United States and Australia.

The exercise will be conducted at Foreign Training Node, Belagavi (Belgaum, Karnataka) from 27 February 27 to March 10.

The scope of this exercise covers platoon-level joint training on operations in the jungle and semi-urban/urban terrain.

They will share experiences gained during operations in order to enhance inter-operability in planning & execution of various operations in jungle & semi urban/ urban terrain, the ministry added.

The joint field training operation will culminate with a two-day validation exercise scheduled on March 8 and 9.

Special emphasis is being laid on enhancing tactical skills to fight global terrorism and on enhancing inter-operability between the forces and to promote Army to Army relations.

Exercise Dharma Guardian will enhance the level of defence co-operation between the Indian Army and the Japanese Ground Self Defence Forces, which in turn will further foster the bilateral relations between the two nations, said the Ministry of Defence.