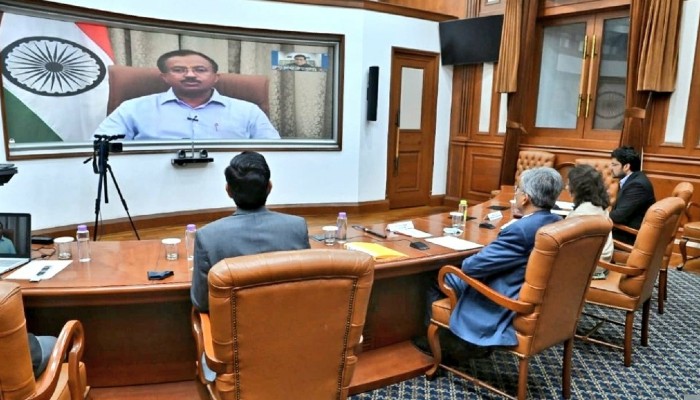 Minister of State for External Affairs V Muraleedharan speaks on 'India’s Diaspora Dividend in the EU'.

EU is one of the preferred destinations for Indians migrating abroad for study, work or business

Minister of State for External Affairs V Muraleedharan on Wednesday said that the Indian Diaspora is one of the strongest factors for furthering ties with various countries including in the European Union.

Muraleedharan, in his Keynote Address at the Virtual PBD Conference on 'India’s Diaspora Dividend in the EU', said that EU has emerged as one of the preferred destinations for Indians migrating abroad for study, work or business.

Referring to the conference as a very timely and important initiative, he said it was part of the Azadi Ka Amrit Mahotsav celebrations commemorating 75 years of the glorious history and achievements of independent India.

“This regional conference with Europe is happening at the time in which there is a greater intensity in ties with the European Union and its Member States in various fields, including the people to people contacts,” the Minister said.

India and EU are two most vibrant democracies, two of the largest open market economies and pluralistic societies, with a long and historic connection, Muraleedharan added.

The two share common perspective on many regional and global issues, including a shared commitment to promoting an international rule-based order based on reformed and effective multilateralism.

He said that the EU is India’s natural and preferred partner.

“Today, EU is home to a rich and diverse Indian diaspora. There are more than 1 million Indians/people of Indian origin in the European Union in various fields such as health, education, business, information technology, etc. contributing to the local economies and furthering our bilateral ties,” he said.

According to the Minister, the Indian diaspora has become a living bridge between our countries and is playing an instrumental role in creating a lot of goodwill and exciting opportunities for enhancing India’s relations with the EU, its various institutions and its Member States.

In the true spirit of Vasudhaiva Kutumbakam, India has traditionally been a pivot of soft power exercise for promoting global peace and progress, and the diaspora has played that role to its true meaning including in the EU, he mentioned.

Stating that the success of each of our overseas Indian has dramatically changed the world’s perception of Indians and of India, he said while India is moving ahead on the path of development at a rapid pace, the achievements and support of our Indian diaspora abroad cannot be overemphasized.

“We have people of Indian origin, as heads of the state and heads of the government, and as heads of large multi-national corporations, raising India's profile in the European Union, Muraleedharan said.

He further expressed happiness to note that India is among the very few countries which has an extensive, proactive and evolving policy framework for engagement with the diaspora.

“The priority of this government is to build everlasting links with the Indian Diaspora the world over and create appropriate channels and avenues for our highly talented and resourceful diaspora to contribute to the rapid socio-economic development and transformation happening in India,” MoS for External Affairs said.

“We can immensely gain from the skills and talents of the diaspora and are committed to harness this potential for mutual benefit,” he added.
“In this connection, various programs have been initiated to connect to diaspora,” the Minister informed.

“Some of the notable schemes are VAJRA Faculty Scheme which brings an international dimension to the R&D ecosystem of India; PRABHASS: ‘Pravasi Bharatiya Academic and Scientific Sampark - Integrating Indian Diaspora with the Mother Land,” he said.

At the India-EU Leaders Meeting held last year in May 2021, both sides launched an ambitious India-EU Connectivity Partnership to give a much needed boost to sustainable projects in the field of physical, digital and energy connectivity, the Minister said.

“People-to-people connectivity has been identified as one of the four key pillars of this partnership underscoring the commitment on both sides to support the free flow of people, talent and ideas between our regions,” he observed.

Noting that the Government is proactively working towards enhancing employment opportunities for skilled Indian workers in foreign countries, Muraleedharan said to have a formal framework of cooperation and maximize the benefits of migration and mobility, India and EU has signed a Common Agenda on Migration and Mobility (CAMM) in 2016.

“Further, to streamline the processes and strengthen long term prospects for our students, workers and professionals, we have entered into a number of agreements on Mobility and Migration with France, Denmark and Portugal, and similar MoUs are under discussion with other countries like Germany, Benelux nations and Italy,” he informed.