In a first, LCA Tejas to participate in UK's Exercise Cobra Warrior 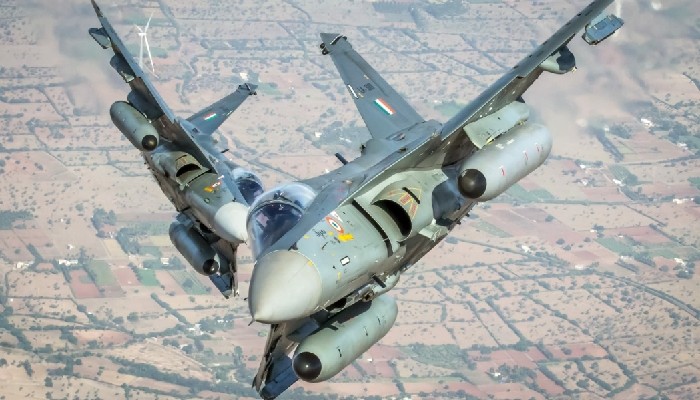 Five LCA Tejas will participate in the exercise.

Five Tejas fighters of the Indian Air Force (IAF) will head to the United Kingdom to participate in the Cobra Warrior exercise at Royal Air Force station, Waddington.

The Waddington air force station serves as the hub of UK Intelligence, Surveillance, Target Acquisition and Reconnaissance (ISTAR), and is the main operating base for airborne intelligence aircraft and systems.

A C-17 heavy-lift aircraft of the IAF will provide transport support, carrying maintenance crew and spares for the fleet in the UK.

Exercise Cobra Warrior is one of the largest annual RAF exercises that is aimed at training both pilots and other air specialists in planning and executing complex airborne missions.

The joint combat exercise is planned along with aircraft from the Saudi, Belgian and Swedish air forces.

RAF Waddington will be home to Indian-based Tejas jets for the week, where they will partake in various air-to-air operations in mock dogfights, aircraft interceptions, and simulated ground attacks.

Last week, a detachment of Tejas Mark 1 fighters participated in the Singapore Airshow held from February 15 to 18. The single jet performance brought impressive stunts and manoeuvers to Singapore's skies.

The Tejas aircraft had also participated in the Dubai Airshow in November last year.

The aircraft is a potent platform for air combat and offensive air support missions while reconnaissance and anti-ship operations are its secondary roles.