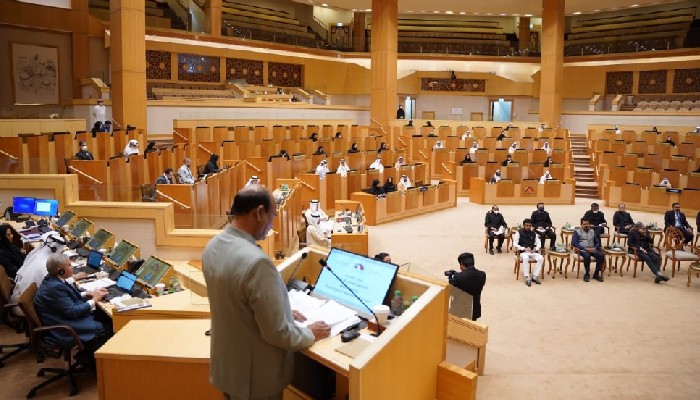 Lok Sabha Speaker Om Birla, who is on an official visit to the UAE, on Tuesday addressed the ‘extraordinary’ session of the Federal National Council of the Gulf country and hailed the strong bilateral ties between the two countries.

He said 3Es—Energy, Economy and Expatriates govern the strong partnership between the two countries.

The Lok Sabha Speaker who is visiting the UAE on the invitation of Federal National Council Speaker Saqr Al Ghobash, also called for launching a united front by the nations of the world to fight the challenges of terrorism and violent extremism. He said this while speaking at a program on Monday.

He condemned the recent terror attacks on the UAE and conveyed strong solidarity with Abu Dhabi to counter terror in all its forms including cross border terrorism, terror financing. The Lok Sabha Speaker, as per the Indian embassy, also emphasized the role of Parliaments in strengthening the legal framework in this regard.

Speaker Om Birla thanked the UAE Government for hosting the 3.4 million strong Indian community in the UAE, the Indian embassy said in a statement.

The UAE side acknowledged the positive contribution made by the Indian community in the economic growth and development of the country over decades, the Indian embassy added.

According to the Indian embassy, this is the first ever official visit by the Speaker of Lok Sabha to the UAE.

The visit reflects the strong and growing bilateral relations between the two countries, the Indian embassy added.

The visit also represents the growing Parliamentary engagement between the two countries. India and UAE have been strong partners in the Inter-Parliamentary Union (IPU), it further added.

Speaker laid a wreath at the Martyr’s Memorial and signed the visitor’s book at Wahat Al Karama. He hailed the supreme sacrifices made by Emiratis and all those who lost their lives in protecting the country, including those at the frontlines during the COVID 19 pandemic.

It may be recalled that on February 18, during Virtual Summit between Prime Minister Narendra Modi and Abu Dhabi Crown Prince Sheikh Mohammed bin Zayed Al Nahyan, the two countries signed a Comprehensive Economic Partnership Agreement (CEPA) which is expected to boost bilateral trade from current US $ 60 billion to US $ 100 billion in the next five years.

The CEPA will also boost bilateral investments and trade in services. The leaders also issued a Vision Statement which will serve as a road map to guide the relationship between the two countries in the times to come.