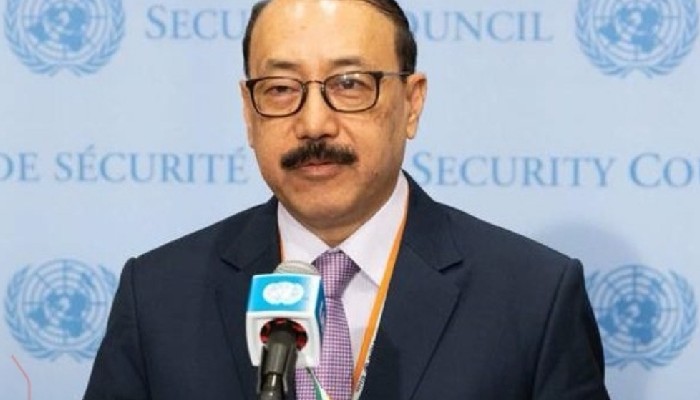 The development cooperation with Bangladesh is the largest that India has with any country, Foreign Secretary Shringla said. (Fi

Bangladesh has historically been an important trade and transportation hub for our subcontinent, he said

While talking about a quantum jump in two-way trade between Bangladesh and India, Foreign Secretary Harsh Vardhan Shringla on Monday said that exports from Bangladesh, for the first time, were expected to cross USD 2 billion this year.

"Early conclusion of a Comprehensive Economic Cooperation Agreement is vital to enhancing this momentum in trade," he said.

Foreign Secretary Shringla was speaking while interacting with the Bangladesh delegation at the 10th India-Bangladesh Friendship Dialogue organized by the India Foundation.

He said that areas like connectivity needed concerted focus as some progress had been made but there was a need to make more effective and sustained efforts.

The development cooperation with Bangladesh is the largest that India has with any country, he added.

While talking about the significance of Bangladesh in terms of trade, he remarked, "Bangladesh has historically been an important trade and transportation hub for our subcontinent."

India and Bangladesh also have signed an ‘Agreement on the Use Chattogram and Mongla Ports for Transshipment of Goods to and from North East of India’. "Fully operationalizing this agreement will bring economic benefits to a range of stakeholders from both countries, he said"

The Foreign Secretary added that while North East India will benefit from a steady supply of goods, the transport and logistics sector in Bangladesh will gain considerably, bringing prosperity on both sides of the border.

He noted India and Bangladesh have made remarkable progress in enhancing connectivity through the use of their inland waterways. "In a significant development, a cargo vessel, in February only, carrying food grains sailed from Patna (Bihar) and will travel via the waterways of India and Bangladesh to reach Pandu (Assam) in early March,” he pointed out.

"Movement of products from locations of production to places of value addition and consumption needs multiple modes of transportation. Our bilateral arrangements should reflect this paradigm to maintain the competitive advantage that our geographical proximity offers us," he added.

He said that a lot can be learnt from the regions and countries around the world that have used this model to reduce logistical costs and enhance competitiveness.