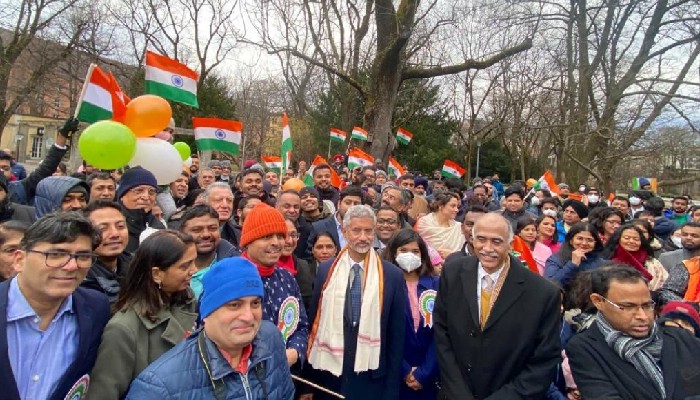 EAM S Jaishankar with members of the Indian community in Munich, Germany on Sunday.

External Affairs Minister S Jaishankar met the Indian community members in Germany on Sunday during which he underlined the strong momentum of relations between the two countries.

Jaishankar, who landed in Munich on Friday to take part in the Munich Security Conference 2022, met the community members before concluding his visit to Germany.

“Wonderful to see the community turnout on a cold Sunday Munich morning. Their feelings for India were so heart-warming. Shared with them the confident national mood. And underlined the strong momentum of India-Germany relations,” he tweeted.

Earlier during his visit, Jaishankar held a meeting with German Minister for Economic Cooperation and Development, Svenja Schulze and discussed the respective development partnership outlook. “We share a commitment to promoting green growth and clean tech,” he said.

Jaishankar also held a series of meeting with ministers from Europe, Asia, Middle East, and other parts of the world during his visit to Germany. In a meeting with Singapore Defense Minister Ng Eng Hen, Jaishankar discussed bilateral and ASEAN-related defense cooperation. They also shared assessments of regional hotspots.

He also had a meeting with Sweden's Foreign Minister Ann Linde, during which he expressed his satisfaction with the progress made in bilateral collaboration.
From Germany, Jaishankar traveled to France.