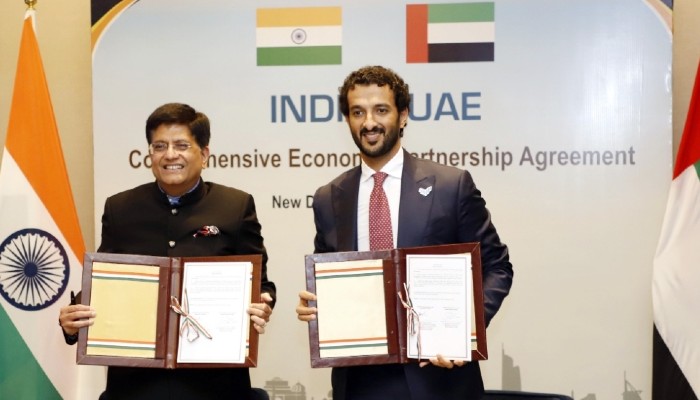 The Comprehensive Economic Partnership Agreement (CEPA) between India and the United Arab Emirates (UAE) is expected to increase bilateral trade from the current $60 billion to $100 billion in the next 5 years.

The agreement to boost bilateral trade, which was signed in Friday, is likely to be implemented within 60 days and entails enhanced market access and reduced tariffs.

It is expected that the CEPA will be supporting energy transition and working on a low-carbon future, establishing a Joint Hydrogen task force to bump up technology and establishing an IIT in the UAE.

The pact was signed by the Union Minister of Commerce and Industry Piyush Goyal during a bilateral meeting with the UAE delegation led by Minister of Economy, Abdulla bin Touq Al Marri and Minister of State for Foreign Trade Thani bin Ahmed Al Zeyoudi.

"It is noteworthy that such an important agreement has been concluded in a record time of less than 3 months. Such agreements generally take years for conclusion," said Prime Minister Modi.

"The agreement demonstrates the deep friendship, shared vision and the trust between the two countries. I am confident that this will usher in a new era in our bilateral economic relations, and the bilateral trade volume will increase from $60 billion to $100 billion in the coming 5 years," the PM added.

Sheikh Mohamed bin Zayed Al Nahyan remarked, "The historic economic agreement demonstrates the commitment of our leaders to the bold Projects of the 50, launched in our pursuit of the next 50 years of progress and prosperity.”

“This deal promises to provide significant benefits to UAE and Indian businesses, including reduced tariffs and enhanced market access, while also breathing new life into trading corridors from Africa to Asia and laying the foundations for growth and prosperity that will benefit the entire region," the Sheikh added.

At a press briefing post signing the deal, Commerce and Industry Minister Piyush Goyal said that India-UAE CEPA was negotiated in one of the quickest time frame of 88 days. He said that CEPA would generate 10 lakh jobs across multiple labour-intensive sectors.

He said that India would get benefits in metals, minerals, petrochemicals and petroleum sectors, whereas the UAE will gain benefits in sectors such as gems and jewellery, textiles, leather, footwear, sports goods, furniture, agricultural products, pharmaceuticals, medical devices, automobile products, among others.

Furthermore, Goyal said that there were many firsts in the CEPA agreement. He pointed out that the UAE had agreed to automatic registration and market authorisation for Indian medicines in case of their regulatory approval in developed countries such as the US, the EU, the UK and Japan.

In addition, the minister said that the agreement had a permanent safeguard mechanism which can be resorted to in a situation of sudden surge in imports, along with strict rules of origin, which will prevent products from other countries through the CEPA route.

Several other agreements were also signed between the two nations, including an MoU between APEDA and DP World & Al Dahra on the UAE side regarding “Food Security Corridor Initiative” and an MoU between GIFT city (IFSCA) and Abu Dhabi Global Market (ADGM).