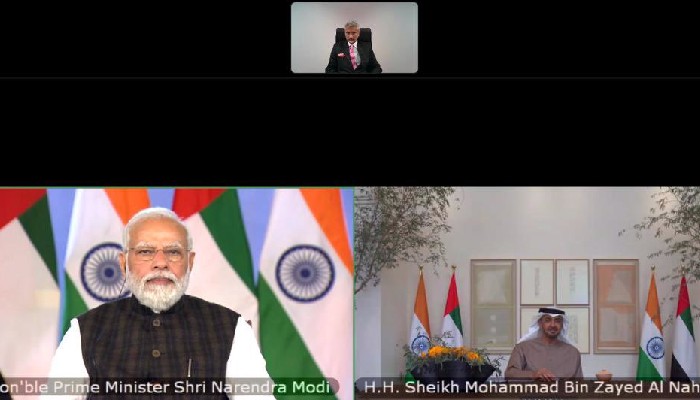 Prime Minister Narendra Modi and Crown Prince of Abu Dhabi Sheikh Mohammed bin Zayed Al Nahyan on Friday held a Virtual Summit and both leaders expressed deep satisfaction at the continuous growth in bilateral relations in all sectors, the PMO said in a statement.

The Statement establishes a roadmap for a future-oriented partnership between India and UAE and identifies focus areas and outcomes. The shared objective is to promote new trade, investment and innovation dynamic in diverse sectors, including economy, energy, climate action, emerging technologies, skills and education, food security, healthcare and defence and security, the PMO added.

A major highlight of the Virtual Summit was the signing and exchange of the India-UAE Comprehensive Economic Partnership Agreement (CEPA) by Minister of Commerce and Industry Piyush Goyal and Minister of Economy of UAE, Abdulla bin Touq Al Marri in the virtual presence of the two Leaders, the PMO further added.

The Agreement will provide significant benefits to Indian and UAE businesses, including enhanced market access and reduced tariffs. It is expected that the CEPA will lead to an increase in bilateral trade from the current USD 60 billion to USD 100 billion in the next 5 years, the PMO informed.

The two Leaders also released a Joint Commemorative Stamp on the occasion of the 75th anniversary of India's independence and 50th year of UAE's foundation. Two MOUs signed between Indian and UAE entities were also announced during the Summit.

These included: MOU between APEDA and DP World and Al Dahra on Food Security Corridor Initiative and MOU between India's Gift City and Abu Dhabi Global Market on cooperation in financial projects and services.

Two other MOUs - one on cooperation in Climate Action and the other on Education have also been agreed between the two sides.

Prime Minister Modi thanked the Crown Prince of Abu Dhabi for taking care of the Indian community during Covid-19 pandemic. He also invited him to pay an early visit to India.