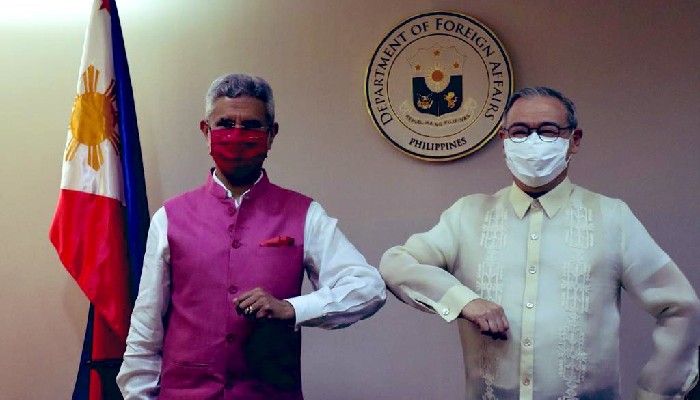 India and the Philippines on Tuesday agreed to further work towards strengthening engagement in counter-terrorism and defence and maritime security.

A decision to this regard was taken during a bilateral meeting between External Affairs Minister, S Jaishankar and Philippines’ Secretary of Foreign Affairs, Teodoro L. Locsin Jr.

The two Ministers also reviewed developments in bilateral relations since the meeting of the Joint Commission on Bilateral Cooperation that they co-chaired in virtual format in November 2020, the Ministry of External Affairs said in a statement.

They also discussed the future trajectory of the wide-ranging engagement between the two countries, the MEA added.

The two Ministers also had an in-depth exchange of views on regional and international issues of mutual interest, the Ministry informed.

As per the Ministry, the two Ministers welcomed recent trends in bilateral ties that have contributed to deepening of mutually beneficial cooperation and the expansion to newer areas based on shared interests in line with the vision of the leadership of both countries.

They agreed to further work towards strengthening engagement in counter-terrorism and defence and maritime security, covering defence capabilities as well as military training and capacity building, it maintained.

In light of the complementarities between two countries as fast growing market economies, and the shared interest in diversifying supply chains, they agreed to make efforts to further expand economic cooperation as well as trade and investment links in a range of areas such as agriculture, infrastructure, health and pharmaceuticals, tourism, ICT, and science & technology, the MEA said.

The Ministers also noted with satisfaction recent initiatives to step up cooperation in emerging areas such as fintech, blue economy, renewable energy, space, cyber security and traditional medicine, it stated.

To expand business, tourism and student exchange between the two countries, both sides agreed upon the need for a simplified visa regime between India and the Philippines, it further said.

EAM Jaishankar also sought the attention of the Philippine government to facilitate early return of Indian medical students to the Philippines, the Ministry added.

Both Ministers agreed to coordinate closely at multilateral fora and reaffirmed their strong commitment to a multifaceted partnership that would facilitate the developmental aspirations and shared priorities of the two democracies in Indo-Pacific region, it further stated.

The EAM interacted with a cross-section of the Indian community in Manila, the MEA continued.