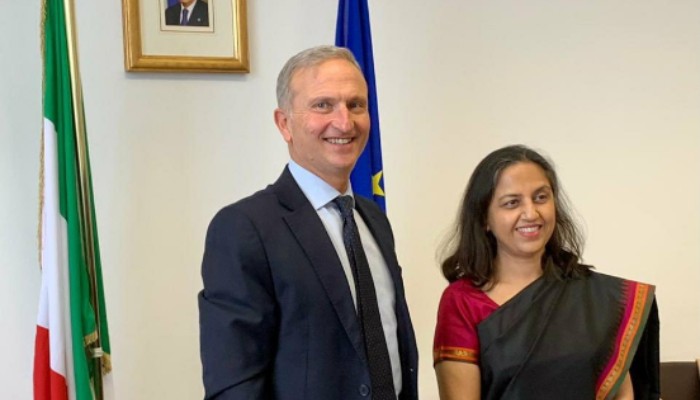 The 8th session of the India-Italy Foreign Office Consultations was held in Rome, Italy

India and Italy reviewed the entire gamut of bilateral relations and discussed regional and global issues of mutual interest during the 8th session of the India-Italy Foreign Office Consultations held in Rome, Italy on Monday.

Both sides reviewed cooperation in the political, trade and economic, defence, science & technology, energy, health, consular and cultural spheres, said a statement of the Ministry of External Affairs.

They expressed satisfaction at the renewed momentum in bilateral relations thanks to regular high level exchanges and shared commitment of both sides to further intensify cooperation in a wide range of areas, the statement mentioned.

They took stock of the progress in implementation of the Plan of Action agreed during the virtual summit in November 2020 and welcomed the Strategic Partnership on Energy Transition launched by the two Prime Ministers in October 2021 which offers fresh opportunities for deepening our multi faceted ties, it added.

According to the MEA, these initiatives have added new content and vigor to India-Italy relations.

The two sides also discussed India-EU relations and agreed on the need to commence negotiations on the India-EU Free Trade and Investment Agreements at the earliest, the statement said.

India welcomed Italy’s interest in the implementation of the EU’s Indo-Pacific guidelines and the India-EU connectivity partnership, it further stated.

Both sides reaffirmed their commitment to enhancing consultation and cooperation bilaterally and in regional and multilateral context, it maintained.

Both sides agreed to hold the next consultations at a mutually convenient date in New Delhi.