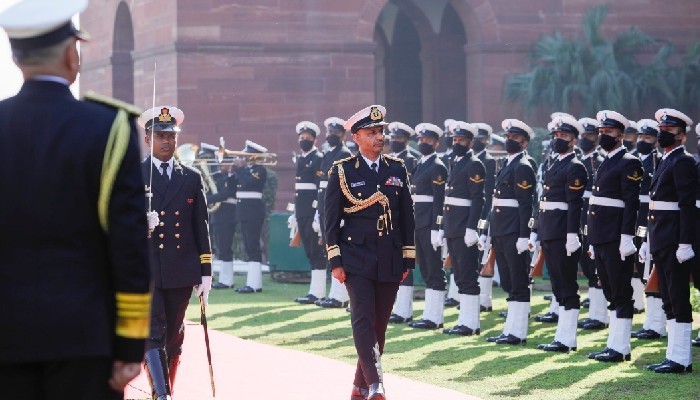 Rear Admiral Saif Al Rahbi was accorded a Guard of Honour at the South Block lawns in New Delhi.

The Sultanate of Oman is a strategic partner of India

A tweet by the Spokesperson of the Indian Navy said that the two highlighted the historical relations between both maritime nations.

The Commander of Royal Navy of Oman (CRNO) Rear Admiral Saif Al Rahbi, who is visiting India from February 14-18, was accorded a 50-men Guard of Honour at the South Block lawns in New Delhi.

The Commander of Royal Navy of Oman also met with Foreign Secretary Harsh Vardhan Shringla and discussed enhancing bilateral defence cooperation and maritime security, guided by Prime Minister Narendra Modi’s vision of SAGAR (Security And Growth for All in the Region).

The Sultanate of Oman is a strategic partner of India and an important interlocutor at Gulf Cooperation Council (GCC), Arab League and Indian Ocean Rim Association (IORA) fora.

In May last year, India and Oman renewed the Memoranda of Understanding (MoUs) on military cooperation along with its annexure as well as on maritime issues.

The signing ceremony of MoU on military cooperation was held at the Ministry of Defense, Muscat.